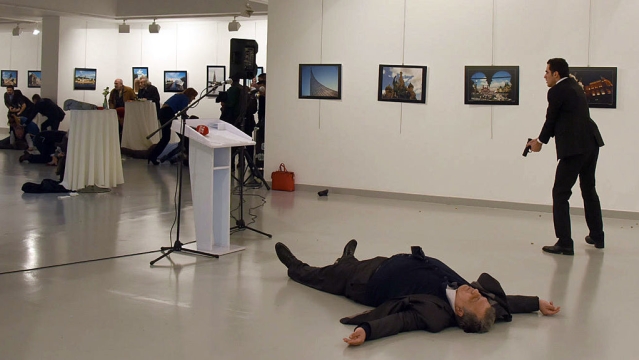 Karlov lies on the floor next to his killer an art exhibition in Ankara. (STRINGER/AFP/GettyImages)

Russian Envoy To Turkey Killed By Gunman: Shouting "Don't forget Aleppo! Don't forget Syria!" a Turkish policeman in a suit and tie shot and killed Russian ambassador to Turkey, Andrei Karlov, 62, in front of stunned onlookers at a photo exhibition. Police killed the assailant after a shootout.

Deposit Old Notes At One Go To Avoid Questioning, Says Jaitley: After tightening rules for depositing old 500 and 1,000 rupee notes, Finance Minister Arun Jaitley on Monday said no questions will be asked if any amount of junked currency is deposited in one go but repeated deposits may raise queries.

Bid To Extradite Masood Azhar: Union Minister Kiren Rijiju said the process to extradite Pakistan-based Jaish-e-Mohammed chief Masood Azhar, his brother and two others will begin soon with the filing of a chargesheet by the National Investigative Agency in connection with terror attack at Pathankot airbase.

Provident Fund Rate Slashed To New Low: More than 40 million pension holders will earn less as Employees’ Provident Fund Organisation (EPFO) lowered its interest rates on deposits from 8.8 per cent to 8.65 per cent. This is the lowest rate of interest on provident fund in the last seven years and may have come to stave off losses in the EPFO. However, it still remains the best bet.

Cyrus Mistry Steps Down From All Tata Firms: Cyrus Mistry, the ousted chairman of Tata Sons, declared that he will resign from the boards of all Tata companies, effectively giving up fighting for his posts in the upcoming extraordinary general meetings. Instead, Mistry will take the Tatas to court.

New Railways Bid To Attract Passengers: In a bid to attract last minute passengers, the railways have revised the flexi fare structure in premier trains by offering 10 per cent rebate on vacant berths after finalisation of the reservation charts. Besides, the railways has also effected reduction in the tatkal quota in Rajdhani/Duronto/Shatabdi trains.

IMF Chief Lagarde Found Guilty: French judges on Monday found IMF chief Christine Lagarde guilty of negligence for failing to challenge a $417 million state arbitration payout to a business tycoon in 2008 when she was French finance minister. The court, however, ruled that she would not be penalised.

Nine Killed In Deadly German Attack: In what appeared to be one of the deadliest attacks in Germany in decades, a truck ploughed into a crowded Christmas market in central Berlin on Monday evening, killing nine people and injuring up to 50 others, police said.

The Rich, Poor And Demonetisation: The real beneficiaries of the shift towards a cashless economy have been large retail stores and the organised sector which were already a part of the digital economy.

Vibrant Gujarat 2017 Will Test The Way The Post-Modi State — And India — Will Be Seen: Vibrant Gujarat represents the state’s attempt at evolution from a trading society to an industrial society to a services and innovation society. This is a journey on the road that Modi built.

Go Local And Go Lobby! A Donald Trump presidency and Brexit were both not predicted by pollsters, so dealing with these black swans is now a reality.

Landing a Leapfrog: The move towards a less-cash economy will depend on speed of infrastructure development, skilful regulation of the payments industry, and concerted efforts to build and maintain trust in invisible cash.

Kerala Slides Into Medieval Intolerance While Communist Government Looks The Other Way: Radical Islamism may well have grown into a monster too big to be controlled in Kerala. The politicians of Kerala are yet to recognise Islamism as a problem.

Real Modi Game Plan Is More Audacious Than Small Gains In Demonetisation: Modi is looking to build a more honest nation out of us, but that is both the political selling point and the likely outcome of reducing the cash economy post-demonetisation.

Budget Merger And RDA: Have Modi And Prabhu Managed To Deliver Two Big-Bang Reforms In One Year? If the Railway Development Authority is approved, Prabhu and Modi would have managed to deliver two biggest reforms in railways in one year.

Digital India Can Create A More Intelligent Economy… If Only It Is Allowed To: Why Digital India has a real chance of translating its lofty goals into tangible results.