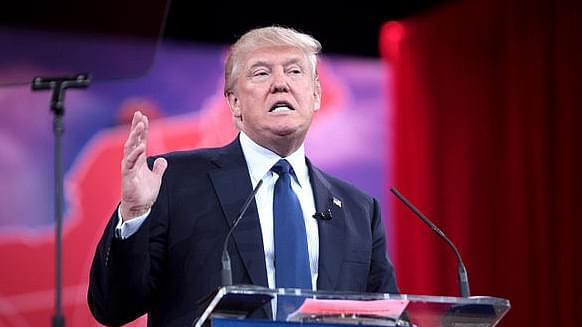 Trump Seeks To Boost Military Spending By 10 Per Cent: The United States, which has an annual military expenditure of $600 billion, is planning to hike its military spending by nearly 10 per cent. The Donald Trump administration has indicated that the increased allocation will come at the expense of cuts to other federal agencies. The current spending is more than that of the defence budgets of the next seven countries combined (China, India, the UK, Japan, France, Saudi Arabia and Russia)

‘Robo Cop’ For CRPF: A 'robo cop' would soon assist Central Reserve Police Force (CRPF) patrols to detect hidden Naxal-planted improvised explosive devices (IEDs) and landmines that have caused numerous fatal causalities in the country's largest paramilitary force. The robot is being tested and it will go for field trials soon. The CRPF director-general K Durga Prasad said the force is consulting IIT-Mumbai to ascertain the capabilities of the device.

INS Viraat Set To Sail Into History: A glorious era in the history of the Indian Navy will come to an end on 6 March with the decommissioning of INS Viraat. The aircraft carrier will retire at a grand ceremony at the Naval Dockyard, Mumbai. The flagship of the Indian Naval fleet, INS Viraat is the longest-serving warship in the world. It is getting ready to say goodbye after 30 glorious years of service.

Life In Jail For SIMI Mastermind: The former head of Students Islamic Movement of India (SIMI) Safdar Nagori and 10 members of his terrorist outfit were sentenced to life imprisonment by a special CBI court in Indore on Monday, in a major boost for law enforcement against the outlawed group, which has allegedly been the feeder for jihadi groups. They were charged with possession of weapons, explosives and ammunition and also for plotting 'anti-national' activities.

Security Cover For Kargil Martyr’s Daughter: Gurmehar Kaur, daughter of Kargil martyr Captain Mandeep Singh, whose social media campaign against the Akhil Bharatiya Vidyarthi Parishad went viral, today filed a complaint with the Delhi Commission for Women saying she is being threatened with rape. Kaur's campaign has not only triggered a huge 'national, anti-national' debate but also has given way to a political slugfest. Kaur has been provided 24x7 security by Delhi Commission of Women home guards.

Chandigarh Faces Complete Liquor Ban: Come 1 April, Chandigarh could face a complete liquor ban, including the ones in hotels, restaurants and shops. The reason behind this lies in the December 2016 Supreme Court judgment, which ordered closure of liquor shops on state highways and national highways. Chandigarh, officially, falls within the ambit of the judgment since all the major roads in the city are labelled state highways.

NASA’s Sun Mission: National Aeronautics and Space Administration (NASA) plans to send its first robotic spacecraft to the sun next year that is slated to get within 6 million kilometres of the blazing star to probe its atmosphere. The sun is about 149 million kilometres from the Earth. “We can’t get to the very surface of the sun, but the mission will get close enough to answer three important questions, said Eric Christian, a NASA research scientist at Goddard Space Flight Centre.

Ban On BBC: The National Tiger Conservation Authority that governs all tiger reserves in India has imposed a ban on BBC and its journalist Justin Rowlatt for five years following the broadcast of a documentary questioning the country’s aggressive protection measures at Kaziranga national park in Assam. Rowlatt's documentary One World: Killing for Conservation came in for sharp criticism from the Environment Ministry for being "grossly erroneous".

Kim Jong-Un Ordered Half-Brother's Killing, Says Seoul: South Korea's spy agency said on Monday that two North Korean ministries orchestrated the plot to kill Kim Jong-nam on the orders of Pyongyang's leader Kim Jong-un. According to a news report, the National Intelligence Service said four of the eight suspects behind the murder worked for Pyongyang's Ministry of State Security, with two others being from the Foreign Ministry.

Raja Mandala: Fruits Of Patience: The hints from Beijing that China is more open on this question are welcome. So are the continuing talks on international terrorism and the discussion on potential for cooperation in stabilising Afghanistan.

The Transcendental Economist: The stunning theoretical contributions of Kenneth Arrow, who died last week, both built and undermined all of politics and all of market economics.

The Prospects Of UK-India Economic Ties: UK businesses are much more bullish about India than they were three years ago. While the trade relationship is underperforming, the UK-India bilateral investment partnership is very strong.

Demonetisation’s Impact On The Corporate Sector: Opinion is divided whether we will then see a V-shaped recovery or a more sedate one. The initial disruption that may be caused by the introduction of the goods and services tax in the next fiscal year needs also to be weighed.

As #UP2017 Enters Fifth Round, A BJP Surge Is Evident: #UP2017 was a race that began many weeks before the first was cast on 11 February. At various points in the race, different players seemed ahead. But now, as it nears completion, there is a palpable BJP surge.