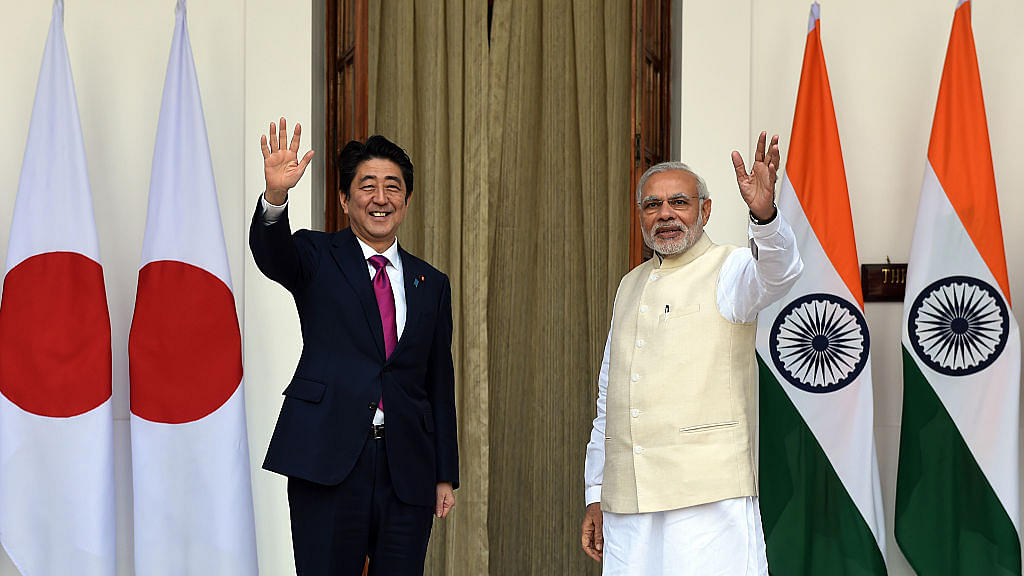 Prime Minister Narendra Modi with his Japanese counterpart Shinzo Abe during his visit to Japan. (SHARMA/AFP/GettyImages)

India-Japan Civil Nuclear Deal Comes Into Force: The landmark India-Japan civil nuclear agreement came into force on Thursday. The deal allows Japan to export nuclear technology to India, making it the first non-proliferation treaty signatory to have such a deal with Tokyo. Foreign Secretary S Jaishankar exchanged the diplomatic notes with the Japanese envoy to India to formalise the completion of the process. The pact was signed in Tokyo during the visit of Prime Minister Narendra Modi to Japan on 11 November 2016. The operationalisation of Indo-Japan civil nuclear deal is in keeping with the Modi government’s goal to enhancing nuclear power generation in India.

Green Light For 34 Mega Multi-Modal Logistics Parks: A plan to build 34 mega multi-modal logistics parks at an investment of Rs 2 lakh crore was given the go-ahead by the Union government. "Logistics parks will act as freight aggregation and distribution hubs and will enable long haul freight movement between hubs on larger sized trucks, rail and waterways. It will reduce freight transportation costs," Road Transport and Highways Minister Nitin Gadkari said. Gadkari said he was already in touch with various global companies that build and maintain logistics parks. The projects, for which land is already available with state governments, will be taken up through public-private-partnerships.

New Deadline On Reporting Foreign Funding Of Political Parties: The Delhi High Court asked why the Union government has not acted against the Congress and the Bharatiya Janata Party for accepting foreign funding in violation of the law, despite a 2014 court direction. Justice A K Chawla gave six weeks' time to the Ministry of Home Affairs to file compliance report on its 2014 judgement. The 2014 judgement had found both parties flouting the norms of the Foreign Contribution (Regulation) Act by accepting donations from Indian subsidiaries of UK-based Vedanta Resources.

Data Collection Doesn’t Invade Privacy, Observes SC: The Supreme Court said on Thursday that data collection for handing social benefits doesn’t invade people’s privacy. A nine-member constitution bench, headed by Chief Justice J S Khehar, made the remark during a hearing to determine if privacy is a fundamental right, in a case that could have a bearing on the government’s push to link Aadhaar with a string of services and schemes. While hearing a challenge to the government's Aadhaar database, the Supreme Court said companies like Apple already have access to the personal data of users. "When one can share personal data with private players like Apple, why not share it with the government? What's the difference?" asked Justice D Y Chandrachud.

President-Elect Vows To Protect Constitution: President-elect Ram Nath Kovind on Thursday said he will work towards protecting the Constitution and upholding its values. “This is a very emotional moment,” Kovind said after being elected President of India. “This is a very big responsibility for me. It is my duty to protect the Constitution and uphold its values as the President. I pay my respects to my countrymen and assure them that I’ll serve the nation in the spirit of Sarve Bhavantu Sukhinah (May all be happy),” he said. Kovind, the ruling National Democratic Alliance’s candidate, was elected as the 14th President of India, defeating former Lok Sabha Speaker Meira Kumar, after vote count in Parliament House.

Rs 15 Lakh Loan Through ATMs: ICICI Bank on Thursday launched a facility for instant disbursal of personal loans through ATMs or automated teller machines. The country's largest private sector bank by consolidated assets, said the facility offers a bouquet of features – swift application in simple steps, multiple eligible loan amount options up to Rs 15 lakh based on pre-checked CIBIL scores and instant transfer of the money to the customer’s account. The facility also incorporates an additional level of authentication to make the security of the offering robust. Through this offering, a customer can get personal loans of up to Rs 15 lakh for a fixed tenure of 60 months.

Kerala Nurses Call Off Strike: After intense protests for around two months, private hospital nurses in Kerala called off their strike on Thursday after the government agreed to enforce a hike in their minimum pay to Rs 20,000. Around 80,000 nurses in the private sector are expected to benefit from the decision. The decision to call off the strike was taken at a meeting of the representatives of nurses and private hospital managements convened by Chief Minister Pinarayi Vijayan. It was agreed to implement the minimum pay of Rs 20,000 to nurses working in private hospitals with less than 50 beds, Vijayan said.

Vaghela May Split Congress Today: On his seventy-seventh birthday today, former Gujarat chief minister Shankersinh Vaghela is all set to split the Congress state unit, a move that is likely to hurt the main opposition party’s chances in the November assembly polls. Vaghela is holding a rally in Gandhinagar to celebrate his birthday and announce his plans, which may substantially alter the political course in the state. It is understood that Vaghela is nurturing plans to spearhead a third front, which may include Nationalist Congress Party, Janata Dal (United) and emerging young turks like Hardik Patel, Alpesh Thakore and Jignesh Mewani.

Agrarian Crisis: The Challenge Of A Small Farmer Economy: Landless or marginal farmers lack the resources to either buy or lease more land or invest in farm infrastructure. Government procurement at the minimum support price is supposed to protect the farmer. But it mainly benefits the large traders.

Labour In India: Quality Of Quantity Counts: An overhaul of India’s labour market data is needed. Indians aspire to higher pay, better and more productive working conditions, and safer, cleaner and more stimulating work. It is time to meet these aspirations.

Is Deflation Bearing Down On Asia? Asia, unfortunately, will now live in near-constant fear as #ChinaMeltdown moves from hashtag to reality. China is at the crossroads where the ideologies of Keynes and Friedman meet: aggressive stimulus over time loses potency, requiring ever bigger doses.

With Mayawati’s Exit From RS, Opposition Strategy To Take On Modi In 2019 Is Taking Shape: The opposition is slowly discovering elements of the strategy that can ultimately roll back the Modi juggernaut in 2019, or at least deny the BJP a majority of its own.