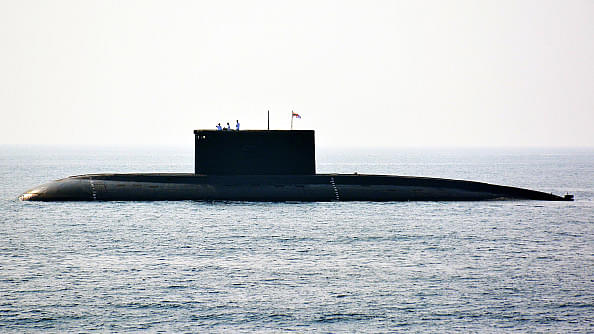 Six Global Firms In Fray To Build Advanced Stealth Submarines: After an agonising 10-year delay, India has finally given a major thrust to its underwater defence deals. Shipbuilders from France, Germany, Russia, Sweden, Spain and Japan are in the fray to construct six advanced stealth submarines for an estimated Rs 70,000 crore ($10.9 billion) in collaboration with an Indian shipyard. This conventional submarine programme called Project-75 (India) is likely to be the first mega project under the new 'strategic partnership' policy finalised by the Defence Ministry earlier this year. The Indian Navy, according to approved plans, should have 18 diesel-electric submarines as well as six nuclear-powered attack submarines and four nuclear-powered submarines with long-range nuclear-tipped missiles for effective deterrence against China and Pakistan.

Russia Makes A Pitch For MiG-35: Although MiG aircraft have been used by India for nearly half a century, Russia is not leaving any stone unturned as it pitches for new fighter MiG-35. Describing MiG-35 as “the best” MiG corporation chief Ilya Tarasenko said Russia is keen to sell its new fighter MiG-35 to India. Tarasenko said New Delhi has shown interest and talks are on to understand its requirements. He claimed that MiG-35 is better than rival Lockheed Martin's fifth-generation combat aircraft F-35, and it would beat the American jet in air-to-air combat. On the cost front, Tarasenko said MiG-35 was economical because of after-sales services offered along with the aircraft.

Birth Certificate Not A Must For Passport: Birth certificate will no longer be required to get a passport. The government has introduced this measure along with a host of others to simplify the process of passports application for Indian citizens. The government informed Parliament this week that Aadhaar or PAN card among a host of documents could be used to establish proof of birth. New passports will have personal details printed in both Hindi and English. Applicants over 60 and below eight years of age will get a 10 per cent discount on passport fees. Online applicants need only provide the name of one parent or guardian, not both, helping single parent families.

New Drive For Bankruptcy Protection For Individuals: We have heard about bankruptcy protection for large corporate houses who default on their borrowings. But now the government has initiated a move on laying down a process for individuals to be declared bankrupt, which will help them deal with a financial crisis. The rules being framed will help a defaulter repay the money in a structured way. Sources said “the idea is to make the process more humane as the rules would deal with a host of individuals – from farmers and kirana shop owners to a salaried middle class person who may be struggling to repay a loan for reasons like loss of job”. There are laws dating back over a century to deal with individual bankruptcy but they have been used only sparingly in the last several decades.

Move To Cut Cost Of Drinking Water At Railway Stations: In a move to cut the cost of water at railway stations across India, the Indian Railway Catering and Tourism Corporation (IRCTC) is planning to install 1,100 water vending machines (WVMs) at 450 stations in 2017-2018. The initiative, which will help in generating employment for around 2,000 people, will see a glass of 300 ml water dispensed through these machines cost just Re 1. At present, there are 1,106 WVMs at 345 stations in the country, the Railway Ministry said, and added that water dispensed through these machines will be much cheaper than bottled mineral water. The new price structure: A glass of half litre water will cost Rs 3, a litre will be available at Rs 5, two litres for Rs 8 and a can for Rs 20.

Indian Army’s indigenisation Push In Components And Spares: The India Army has decided to fast-track indigenisation of key components and spares for battle tanks and other military systems as delays in import of critical equipment are severely affecting its combat readiness. A senior Army official said the initiative to go for indigenous production of spares is in sync with Defence Ministry's policy to cut import bill on defence and promote the domestic industry. The official said the Army plans to involve micro, small and medium enterprises (MSMEs) to produce smaller parts of the weapons systems. Extensive discussions were already held with around 80 MSMEs. The Ordnance Factory Board has decided to bring down import of spares and components from current 60 per cent annually to 30 per cent in the next three years, the official said.

New Push For Uniformity In NEET Papers: The National Eligibility-cum-Entrance Test (NEET) questions in the regional languages will be similar to those in English from 2018. The big ticket announcement came as the Centre decided to maintain uniformity in the test papers in all the languages from next year in wake of controversies over a difference in questions that came in Hindi and those in some of the regional languages including Tamil and Bengali this year. "The vernacular question papers for the NEET– all India entrance examination for medical colleges – will just be a translation of the question paper in English," a news agency quoted Human Resource Development Minister Prakash Javadekar as saying in Kolkata.

Gulf Boom Waning, Remittances Dip: There is a significant drop in the number of Indian workers emigrating to the Gulf countries. The decline has been significant between 2014 and 2016. According to official figures, the number of Indian workers emigrating to the region was 775,845 in 2014 and fell to 507,296 in 2016. The reduced flow of Indian workers to the Gulf is seen to have impacted remittances from these countries. While the breakup is not available, overall remittances as recorded in India's balance of payments statistics fell slightly from $69,819 million in 2014-15 to $65,592 million in 2015-16.

A Case For Larger Benches: One way that the Supreme Court has tried to keep pace with the increasing case load has been to institute small bench hearings. It is important to have a large bench decide major cases, particularly one that has a direct bearing on individuals.

GSTN And UPI Will Help Expedite Financial Inclusion: Most Indian MSMEs currently have to rely on the informal lending sector, or their own internal accruals for growth capital. Taken together, both GSTN and UPI will enable lending to the much neglected MSME sector and significantly accelerate the goal of financial inclusion.

Will Reliance Jio Enable JAM Vision? The information highway that Reliance Jio is seeking to expand so dramatically can only see further improvements with increased competition. Reliance Jio’s JioPhone will serve as a catalyst to Jan Dhan-Aadhaar-Mobile (JAM), especially if tied with in bankers operating in the virtual space.

NITI Aayog: An Institution To Fix Implementation Issues: It is high time that NITI Aayog realises it needs to metamorphose into an organisation which can transform implementation of policy reforms. NITI Aayog is responsible for monitoring and evaluating government schemes but its performance is below par.

Rashtriya Rifles: The Story Of Independent India’s Finest Military Experiment: The RR is well known as a specialist organisation created to fight terrorism in Jammu and Kashmir, but how much do people know about India’s finest military experiment since Independence. Here’s a peep into an organisation, which is barely 25 years in being, yet has risen to become an icon in itself.