Mumbai: Second AC Local Train With Train-18 Like Features To Be Inducted By January 2019; Dozen More By 2020 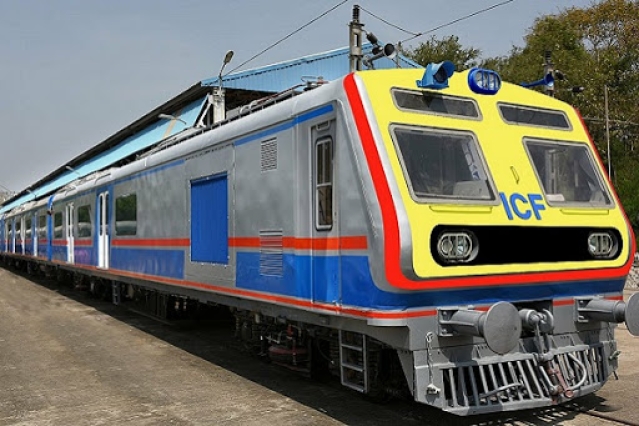 Buoyed by the excellent patronage that the solitary Air-Conditioned (AC) local train in Mumbai has received, at least a dozen more AC local trains will be inducted to the Mumbai suburban network by April 2020.

Mumbai’s first AC local train service was launched on 25 December last year. It makes 12 trips a day between Virar and Churchgate. It carries an average 1,500 commuters per trip. Cumulatively, 40.43 lakh passengers travelled in the AC local and a revenue of Rs 16.65 crore was generated for Indian Railways.

The city will now get its second AC local train, a vastly improved version of the earlier model, with design and features mimicking that of Train-18. Train-18 is India’s first indigenously build engineless train that recently completed a trial run clocking a top speed of more than 180 kmph.

The AC trains are manufactured at the Integral Coach Factory (ICF), Chennai. The second AC local train will arrive in Mumbai on the first of January, 2019 and will be deployed in to service immediately.

Aesthetically, it will sport a look similar to that of the metro train. It will also have an increased carrying capacity and will run between Virar and Churchgate. While the AC local currently in use has a capacity to accommodate 5,964 commuters, the new train is built to carry an an additional 350 passengers. This new train will be entirely vestibule. The new local train will also work on a door closure system so that there is no loss of time.

Mumbai Mirror quoted Shubhranshu, the principal chief engineer Integral Coach Factory (ICF) as saying that “The train will be fitted with under-slung equipment, which means electrical equipment will be below the rake. Commuters will also experience a far smoother ride compared to other trains because the under-slung equipment lowers the centre of gravity of the coaches, thereby improving stability at high speed and on curves.”

Even as it faced many operational glitches and was not available over the weekend, the local AC train received tremendous patronage from passengers. On 1 November, on popular demand, halts were added at Marine Lines, Charni Road, Grant Road, Dahisar, Mira Road, Naigaon and Nallasopara. The move to introduce additional stops has enhanced the revenue for Western Railway.

The Hindu quotes WR chief public relations officer Ravinder Bhakar as saying that “Approximately 47,800 passengers have taken AC locals from these seven stations. This has generated additional revenue of Rs 19.67 lakh, with Mira Road being the highest earner at Rs 6.40 lakh,” he said.

The railway sources said the AC local services can be extended now to the weekend with two trains in the fleet.