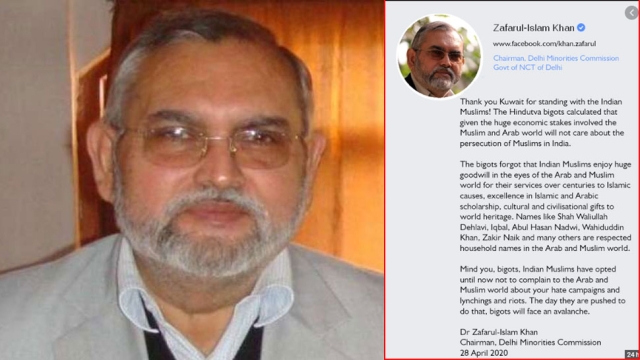 Prominent Muslim leaders have demanded withdrawal of FIR registered against Chairman of the Delhi Minorities Commission Zafarul Islam Khan who has been booked on sedition charge for his social media posts.

"We condemn the action by the Delhi Police against Dr Zafarul Islam Khan. The biased role of Delhi Police has once again been exposed by its action against the Chairman of the Delhi Minorities Commission over something he tweeted a few days back," said the statement signed by many Muslim leaders.

The statement said that "One may differ with the content of Dr Khan's tweet and he had issued a clarification regarding the same. This kind of action during the lockdown, exactly before iftar time, against the head of a quasi-judicial institution, gives an idea about the level to which the police can stoop."

It alleged that after failing to arrest those responsible for the loss of life and property during the riots in northeast Delhi, the Delhi Police is targeting Muslims.

Delhi Minorities Commission chief Zafarul Islam Khan on Friday (8 May) moved an anticipatory bail plea in the Delhi High Court saying he apprehended his arrest in a complaint registered by Delhi Police.

It should be noted that Delhi Police's special cell had booked Khan under charges of sedition for making 'provocative' remarks in his social media posts for which he had later issued an apology.

He is @ArvindKejriwal govtâs minority commission Chairman. He is openly threatening avalanche of Hinduâs . Zakir Naik is a hero for him. Now you know why Kejriwal Govt didnât give 1cr promised to Ankit Sharma yet. pic.twitter.com/AYeFQhQ1sc

In his post, Khan hailed Islamic Salafi-jihadist preacher Zakir Naik, whose preaching is banned in various countries, who is linked to many terrorism incidents, and is wanted in India for criminal activities. Furthermore, the Interpol has also issued a red corner notice (RCN) against him.

After Khan's communal remarks had set off a controversy, he had issued a statement in which he claimed to acknowledge that his post was 'ill-timed' and 'insensitive' in the view of nation's ongoing fight against the COVID-19 pandemic.