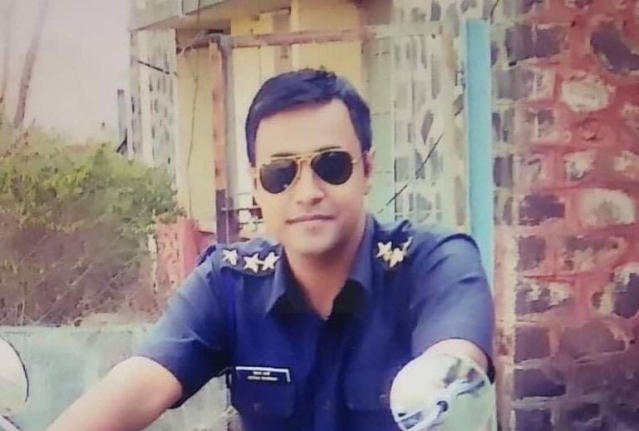 The nation bid a tearful farewell to one of its bravest sons amid chants of ‘Desh ka beta kaisa ho, Ketan Sharma jaisa ho’, as Major Ketan Sharma’s mortal remains were brought to his hometown Meerut in Uttar Pradesh on Tuesday, reports India Today.

Major Sharma was martyred during a gun-fight with terrorists that followed the cordon-and-search operation in the area by the security forces in Achabal area of the Anantnag district in Kashmir on Monday.

Ketan was the only son of his family and is survived by his wife and four-year-old daughter Kiara. Sharma’s mother, in particular, was soaked in grief knowing that her beloved son will never be back. “Mera Sher Puttar ko kya huaa? Mere ko batado mera beta kab aayega?” wept the mother.

For hours before and after the mortal remains of the martyr arrived at his Meerut home, army personnel tried their best to console the sorrow-stricken family.

Ketan was the only son of the family and has a 4-year-old daughter Kiara. pic.twitter.com/9ASlikyifV

A huge public gathering, in thousands, surrounded the home of the martyr and raised the slogan, “Desh ka beta kaisa ho, Ketan Sharma Jaisa ho,” paying tribute during the last rites of the Major.

Born in 1987, Sharma was commissioned in the army in 2012 and has been into the counter-terrorism responsibility in the valley for the past two years. Sharma was part of 19 Rashtriya Rifles of the Indian Army.

Defence Minister Rajnath Singh and Army Chief General Bipin Rawat also paid tribute to the officer at the Palam airport in the national capital, before his mortal remains were taken to Meerut.