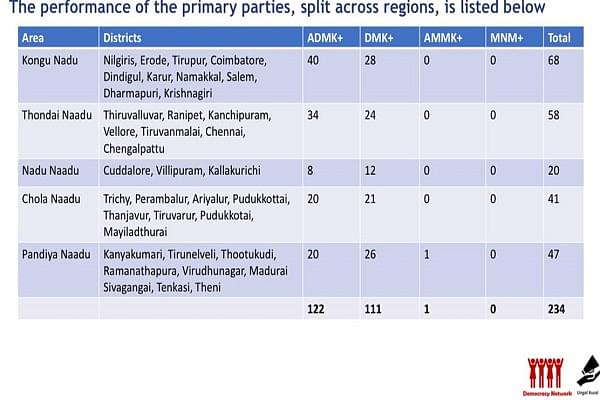 An opinion poll by Democracy Network and Ungal Kural has predicted a photo-finish between the ruling AIADMK and opposition DMK in the Tamil Nadu assembly polls, Economic Times has reported.

The opinion poll predicts that as things stand, the AIADMK has an edge over DMK due to a strong showing in the Kongu region and incremental gains due to its allies in Thondai.

As per the opinion poll, AIADMK will win 122 seats, closely followed by the DMK at 111 seats. The T T V Dhinakaran led AMMK could win a solitary seat.

AIADMK's strongest performance is predicted in the Kongu Nadu region where it may win 40 out of 68 seats - with the DMK bagging the remaining 28. Similarly in Thondai it may win 34 seats to DMK's 24.

The Stalin led party on the other hand is outperforming AIADMK in regions like Nadu, Chola and Pandiya regions.

The opinion poll claims that AIADMK is benefiting due to farm loan waivers and other welfare programs. The DMK on the other hand may be adversely affected by new entrant MNM. The Kamal Hassan led party may capitalise on some anti-incumbency at DMK's expense.