New York Police Union Head To Media: “Stop Treating Us Like Animals And Thugs, Start Treating Us With Some Respect” 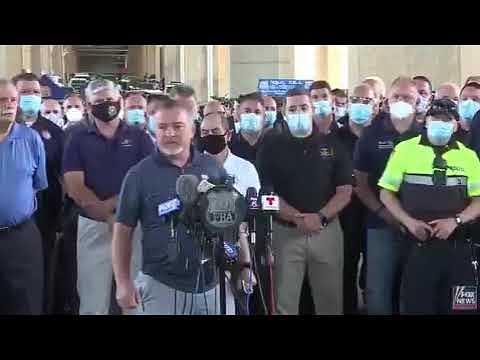 Mike O’Meara, the head of New York State’s police has strongly criticised the media and politicians for treating the police force like “animals.”

“I am not Derek Chauvin; they are not him,” Mike O’Meara, president of the New York Association of Police Benevolent Associations, told reporters on Tuesday (Jun 9) while pointing to officers gathered standing behind him. “He killed someone. We didn’t.”

"Stop treating us like animals and thugs and start treating us with some respect ... Our legislators abandoned us. The press is vilifying us. It's disgusting." pic.twitter.com/CXOPARKff7

“Trying to make us embarrassed of our profession… Nobody talks about the police officers that were killed in the last week in the united states of America and there were a number of them.” he added.

New York Mayor Bill de Blasio announced on Sunday that New York City would reduce police funding and redirect it to other welfare programs. The New York Police Department also faced criticism from Governor Andrew Cuomo who alleged that the police in New York City were not effective at doing their job.

Following the widespread riots and looting in the US following death of a black American George Floyd , the police across the country has come under severe scrutiny for its perceived racial bias. A white officer was seen pressing his knee into Floyd’s neck after the later was held for producing a counterfeit 20 $ note in a local store. Floyd died within minutes