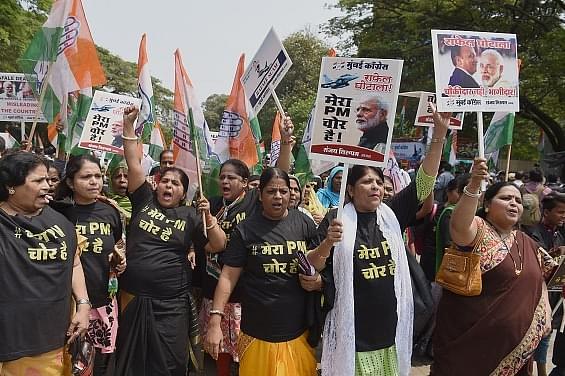 India’s Congress party workers shout slogans as they hold placards during a protest against the Rafale fighter jet deal, in Mumbai on September 27, 2018 (Photo by INDRANIL MUKHERJEE/AFP/Getty Images)

Seeking an independent probe by the CBI, former ministers Arun Shourie and Yashwant Singh along with activist lawyer Prashant Bhushan moved the Supreme Court over the alleged corruption involved in the Rafale deal.

As reported by The Economic Times, the 32-page complaint with 46 annexures gave details of what was described as evidence of cognisable offences under the Prevention of Corruption Act (PCA) by public servants occupying the highest offices of the land.

In purchasing the Rafale jets at double the cost, high-ranking officials had committed gross “criminal misconduct” and other offences under the Prevention of Corruption Act, the complaint alleged.

It also urged the court to direct the central government to desist from interfering in the probe or transfer any officials involved in the task.

“Till date not even an FIR has been registered in the matter and hence the petitioners are approaching the court for getting specially designated officers in the CBI to investigate this case and for this court to monitor the investigation. Hence, the present petition.”

Where a statute specifically permits a preliminary inquiry, it is to be restricted to ascertaining whether the information provided prima facie pertains to a cognisable offence, and if it does then an FIR is to be mandatorily registered and thereafter investigated, it added.

The court had ordered that the preliminary inquiry must be completed within seven days, which ended on 11 October.