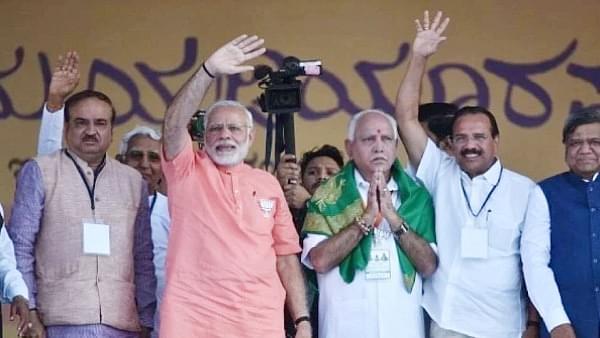 As election fever runs high in Karnataka, with the state going to polls next weekend (12 May), both the major parties are leaving no stone unturned to woo the voters. The Bharatiya Janata Party today (4 May) launched its election manifesto, titled ‘BJPVachana4Karnataka’.

Among the list of vachanas (promises), the party has claimed that it will ensure a host of measures for the protection of culture, especially with respect to freeing temples from government interference.

The manifesto listed out these measures that the party says it will take up:

1. Ensure no interference by the government in temple administration and maintenance

2. Ensure temple revenue is used only and fully for expenditure on temples and related religious institutions

3. Set up a Rs 500 crore “Devalaya Punnaruthana Fund” for the restoration and renovation of temples and mathas

4. Ensure all bodies formed to administer Hindu religious institutions consist solely of the members of the Hindu community

Ensure that the revenue of temples is used only and fully for expenditure on temples and related religious activities#BJPVachana4Karnataka pic.twitter.com/7RareHHFyH

The manifesto, released by the party’s chief ministerial candidate, also lists measures for a cultural ‘upheaval’ in the state:

1. Set aside Rs 100 crore towards setting up various institutions for theatre, art, music, yoga, and Sanskrit

2. Cultural centre in Mysuru to house an auditorium built in the Hoysala style of architecture, a museum built in the Chalukyan style, and a yoga and music institute

3. Set up an Amara Shilpi Jakanachari fund with a corpus of Rs 30 crore to revive traditional schools of art and architecture

4. Restart the tradition of temple music in all major temples of the state

5. Build all government buildings in architectural styles native to those regions

This manifesto was released by the party after paying homage to sitting Member of Legislative Assembly and its candidate for Jayanagar constituency, B N Vijaykumar, who died of a heart attack during campaigning.

The 224-member Assembly will to go to polls on 12 May and the counting of votes will be done up by 15 May.