On Liberation Day, Bangladesh Publishes List Of ‘Razakars’ Who Carried Out Acts Of Murder, Rape With Pak Army 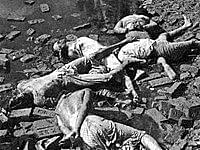 On the eve of its liberation from Pakistan, Bangladesh on Sunday (15 December) published a list of 10,789 Razakars (volunteers) who aided, abetted, and collaborated with the Pakistani forces back in 1971 that led to the genocide of over 30 lakh people and the rape of over 2 lakh women in the war of 1971, reports News18.

Liberation War Affairs Minister A K M Mozammel Haque released the list at a press briefing here and said, “The initiative has been taken to introduce the anti-liberation forces to the new generation.”

The Razakars were the volunteers who actively took part in the acts of murder, rape and looting in the erstwhile East Pakistan. In Bangladesh, razakar is a pejorative word meaning a traitor and this auxiliary group systematically with the support of the Pakistan army, targeted Hindus and Bengali nationalists during the 1971 liberation war.

A K M Yusuf, was a member of fundamentalist Jamaat-e-Islami, was believed to be the founder of the Razakar force. He was arrested in May 2013 and charged with crimes against humanity but he died of cardiac arrest in 2014 while in detention.

Details of the Bangladesh “War Crimes” committed by Pakistan army and East Pakistani collaborators known as Razakars are brilliantly documented by former American diplomat Archer Kent Blood who was the last American Consul General to Dhaka, Bangladesh (East Pakistan at the time).

There is also a Pulitzer Prize finalist book ‘The Blood Telegram: Nixon, Kissinger, and a Forgotten Genocide by author Gary J Bass and in this book there are full details of how the Americans knew about the murder and rape of men and women of East Pakistan but did nothing due to strategic reasons and then president Nixon’s hatred towards India.

The predominantly Sunni Punjabi Pakistan army wilfully carried out the murder of over 30 lakh Bengali Muslims and Hindus and is responsible for the industrial scale rape of over 2 lakh women in their infamous rape camps.