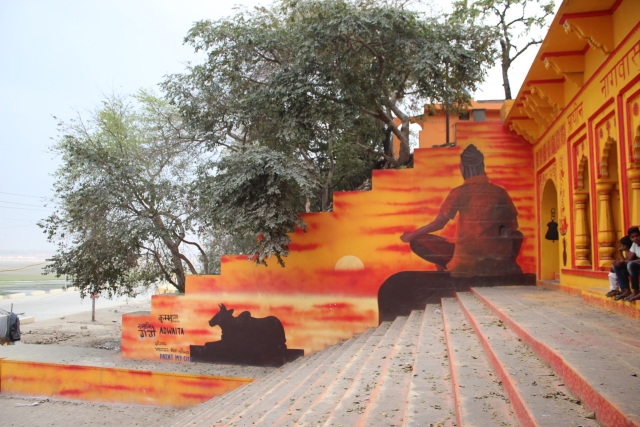 On the Ganga ghats at Prayagraj/Image Courtesy Harsha Bhat

The annual Magh Mela, one of the biggest religious congregations on the banks of the Sangam in Uttar Pradesh's Prayagraj, began here on Friday (10 January) on the occasion of "Paush Purnima" even as temperatures dipped further adding to the winter chill.

The Magh Mela also marks the beginning of the 'Kalpwas' in which devotees live in segregated areas, lead an austere life and fast and pray for a month.

Tight security arrangements have been made in the Mela township this year with over 3,500 security personnel deployed there.

In view of the extreme cold weather, ambulances have been deployed around the Sangam as well as in other areas of the township to handle any emergency. These ambulances would be controlled through the Integrated Command and Control (ICCC).

According to the police, traffic restrictions will be introduced to streamline vehicular movement on routes leading up to the Mela venue from Friday (10 January).

Teams of STF, ATS, bomb disposal squads and anti-sabotage squad would be patrolling on the ghats to ensure safety of the visitors.

Meanwhile, companies of the CRPF and PAC personnel along with hundreds of policemen have been deployed on the venue as part of security arrangements. The administration has constructed temporary ghats stretching along five kilometres for the convenience of devotees wanting to bathe in the rivers. The 'Jal' Police personnel will also be deployed to check cases of drowning.

The biggest congregation of devotees is expected on 24 January on "Mauni Amawasya" when over 2.25 crore people are expected to take the holy dip in the Sangam.

This annual religious event is being held on over 661 acre land where around 2,200 sanitation workers are taking care of the sanitation and hygiene.

Around 25,000 toilets have been set up in the tent city area. Besides, 13 police stations and 40 police outposts have also been set up and 55 PCR vans have been deployed to maintain round the clock vigil.

Two hospitals of 20-bed capacity each and three hospitals each of Ayurveda and Homeopathy have been set up. These are in addition to the 10 primary health centres.