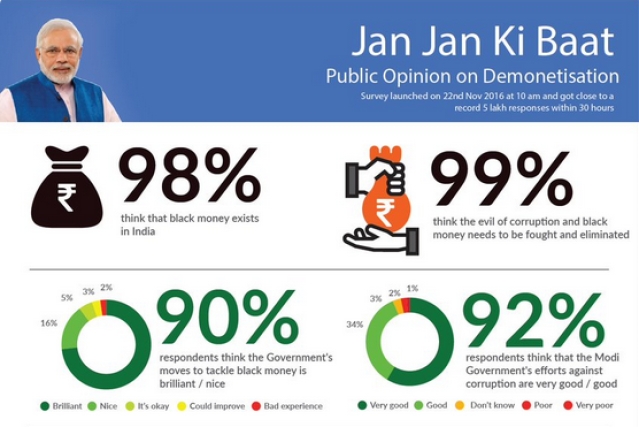 Unruffled by the intensified attack from the opposition over the demonetisation decision, the government on Wednesday (23 November) said over 93 per cent of the people who took part in an app-based survey supported the move. Prime Minister Narendra Modi on Tuesday sought public opinion on his official app where a number of questions have been posted vis-a-vis scrapping of old Rs 500/Rs 1,000 notes. Over five lakh (half a million) people participated in the survey within 24 hours.

"I thank the people for the historic participation in the survey. It's satisfying to read the insightful views and comments," the Prime Minister said in a tweet.

I thank people for the historic participation in the survey. Its satisfying to read the insightful views & comments. https://t.co/xf14LEiQHT pic.twitter.com/cGSBPlCnE5

As per the results posted by Prime Minister Modi in his Twitter account, only two per cent have rated the move as 'very poor'. The survey also said that about 86 per cent people believe that some "so-called anti-corruption activists" are now batting in support of black money and even terrorist funding.

The survey posed 10 questions, to which replies were to be given in the form of rating system from one star to five stars. More than 90 per cent of those joining the survey feel the government's move to tackle black money is above four star rating and above 73 per cent seemed fully satisfied.

Over 92 per cent of the respondents either rated the government as 'very good' or 'good' for its overall fight against corruption. About 98 per cent people felt that black money exists in India and 99 per cent said that they think the evil of corruption of black money needed to be fought and eliminated.