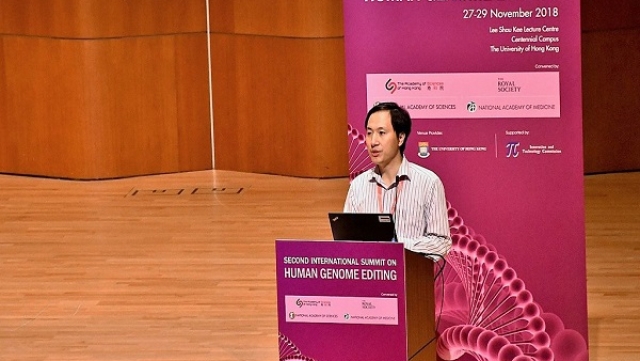 He Jiankui speaking at the Second International Summit on Human Genome Editing in Hong Kong. (Iris Tong for VOA Chinese via Wikipedia)

The Chinese scientist who claimed to have aided in creating the world’s first genetically edited babies has reportedly gone missing, reports the New York Post. He Jiankui of Shenzhen, China had made the sensational claim last week during a presentation in Hong Kong.

The Southern University of Science and Technology in Shenzhen, where he had worked as an Associate Professor, denied claims of the scientist being detained.

Jiankui had caused an international uproar after he claimed to have modified the DNA of the twins Lulu and Nana in an attempt to make them HIV resistant.

The scientist had used the revolutionary gene-editing technology CRISPR to conduct his experiment. His claims were not verified by any reputed scientific journals, and prominent geneticists and researchers had condemned his actions. Investigations by Universities and government bodies of the matter are currently ongoing.

Dr Kiran Musunuru, a gene-editing expert at the University of Pennsylvania called the experiment “unconscionable … an experiment on human beings that is not morally or ethically defensible.”

Scientists attending the International Human Genome Editing Conference in Hong Kong where Jiankui had revealed the details of his experiment denounced his brazenness, stating that it was irresponsible to try a nascent technology on human eggs, embryos or sperms.

Jiankui had also hinted at working on a second gene-edited pregnancy.