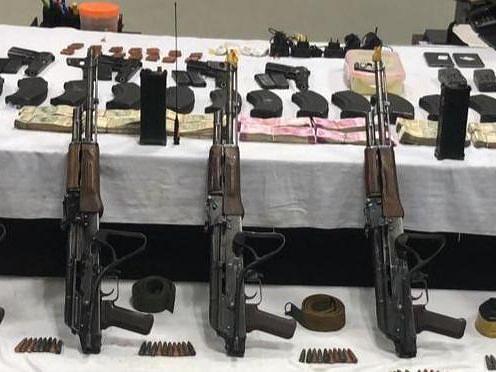 Punjab Chief Minister Amarinder Singh on Tuesday (24 September) sought the Central government's intervention in the recent dropping of arms and ammunition in the state by Pakistan-origin drones.

Recent incidents of Pakistan-origin drones dropping consignments of arms & ammunition is a new and serious dimension on Pakistan's sinister designs in aftermath of the abrogation of Article 370. Request @AmitShah ji to ensure that this drone problem is handled at the earliest.

Two days ago, in a major crackdown on terror, the police busted a module of the revived Khalistan Zindabad Force (KZF), the Pakistan-backed and Germany-based militant group that was conspiring to unleash a series of terrorist strikes in Punjab and adjoining states.

The police said on Sunday that it have seized a huge cache of arms, including five AK-47 rifles, pistols, satellite phones and hand grenades, following a raid in Tarn Taran district, bordering Pakistan.

Given the international links and the ramifications of the conspiracy, the Chief Minister has decided to hand over the further investigations in the case to the National Investigation Agency (NIA) to ensure that the entire conspiracy is fully and expeditiously unravelled.

With initial investigations revealing the use of drones to deliver weapons and communication hardware from across the border, the Chief Minister has also urged the Central government to direct the Indian Air Force and Border Security Force to launch necessary counter-measures to check any further hostile drone activity in the border state of Punjab.

Director-General of Police Dinkar Gupta told reporters here that the weapons were suspected to have been delivered recently from across the India-Pakistan border using drones launched by the Pakistani establishment, the Pakistan Inter-Services Intelligence (ISI), and state-sponsored Jihadi and pro-Khalistani terrorist outfits working under its command.

Gupta said the large-scale infiltration appeared to have been aimed at scaling up terrorism and militancy in Jammu and Kashmir, Punjab and the Indian hinterland, in the wake of the recent developments in the Kashmir Valley.

He said the police operation was based on different inputs gathered from sources that activists of the banned KZF planned to carry out multiple terrorist strikes in Jammu and Kashmir, Punjab and other states.

In an operation carried out by Amritsar AIG (Counter Intelligence) Ketan Baliram Patil along with various Punjab Police teams based in Chandigarh, four module members have been arrested and a large quantity of arms, ammunition, explosives and communication devices have been seized by the police.

Gupta said the module was backed by the Pakistan-based chief of KZF, Ranjeet Singh, and his Germany-based associate Gurmeet Singh, who had re-organised their outfit to revive terrorism in Punjab.

With the help of local sleeper cells, they had spotted, radicalised and recruited local members, besides arranging funds and sophisticated weapons from across the border for operationalising the local module members.

Those arrested have been identified as Balwant Singh, Akashdeep Singh, Harbhajan Singh and Balbir Singh.

Both Akashdeep and Baba Balwant Singh have a criminal past with multiple criminal cases against them.