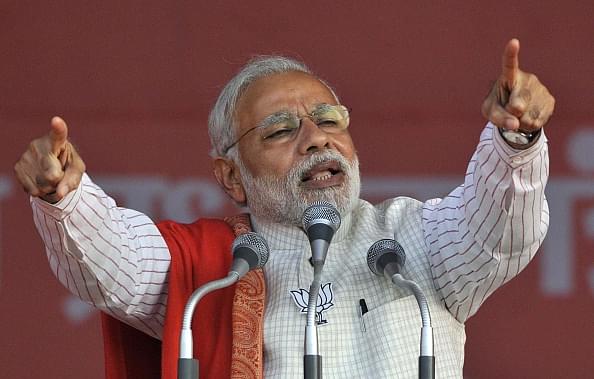 PM Modi at a rally in New Delhi. (Photo by Vipin Kumar/Hindustan Times via Getty Images)

In the backdrop of dusk-to-dawn shut-down being observed by the BJP in Kerala on Saturday (15 December), Prime Minister Narendra Modi instructed grassroots party workers to encourage ‘stakeholders’ to join in their struggle for people’s rights, reports The Indian Express.

The bandh had been called by the BJP in response to the suicide of Venugopalan Nair, who set him himself on fire in proximity to a BJP venue where the party had been protesting the Sabarimala women’s entry issue.

Modi was interacting with Kerala BJP workers through video-conference as part of a country-wide dialogue to reach out to party workers prior to the 2019 General Elections.

“Fight for the people’s rights and welfare and in this process involve the stakeholders. When you’re struggling for people, make them a part of the struggle too…,” Modi told party workers from Thiruvananthapuram, Kollam, Attingal, Mavelikkara and Pathanamthitta constituencies.

As part of the video conference, a party worker hailing from Chathanur in Kollam district asked Modi how the BJP could expand its reach in Kerala. Modi recounted the words of former prime minister Atal Bihari Vajpayee and stated, “Atal ji used to say that one leg of every BJP worker should be inside a train coach, he should relentlessly travel. And the other leg (should be) in jail, where he gets lodged for fighting for people…”