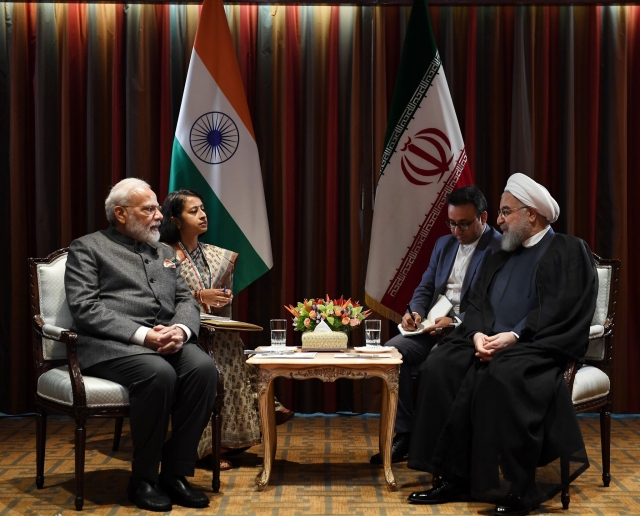 At meeting amid heightened tensions in the Gulf region, an area vital to India's economy, Prime Minister Narendra Modi told Iranian President Hassan Rouhani that New Delhi supports diplomacy and dialogue to bring peace and stability to the zone.

Modi “reiterated India's support for giving priority to diplomacy, dialogue and confidence-building in the interest of maintaining peace, security and stability in the Gulf region,” said a statement issued by India after their meeting in New York on Thursday (26 September).

“They discussed bilateral relations and exchanged views on regional and global developments of mutual interest,” it said.

India has had to cut its oil imports from Iran because of the US sanctions against Tehran after President Donald Trump withdrew from the multilateral nuclear non-proliferation agreement with the Islamic Republic.

Despite the setback due to the oil embargo imposed by the US sanctions, the statement said that “the two leaders positively assessed the progress in bilateral relations since their first meeting at (the Russian city of) Ufa in 2015”.

However, the US has not enforced its economic sanctions on India's Chabahar Port project in Iran close to the Pakistan border.

Modi and Rouhani, who are here for the UN General Assembly, “especially mentioned operationalisation of the Chabahar Port and noted its importance as gateway to and for the landlocked Afghanistan and the Central Asian region", the statement said.

The Gulf region has witnessed a steady escalation of tensions with attacks on oil tankers, Iran shooting down a US drone, and a strike on Saudi facilities attributed by Washington and Western allies to Iran.

Speaking at the General Assembly on Wednesday, Rouhani proposed a Coalition of Hope to bring together all the countries affected by the tensions in the Gulf region to promote peace and stability there.

It could develop in to a mechanism for the collective energy supply security, freedom of navigation and free transfer of oil and other resources to and from the Strait of Hormuz and beyond, he said.

It is, however, unlikely to take off because of the historic rivalries complicated by modern politics among the countries of the region.

Most of India’s oil and gas imports come through the Gulf and the Strait of Hormuz and disruption of the supply route would hit India’s economy.

India has millions of workers in countries of the region who would be affected by conflicts there.