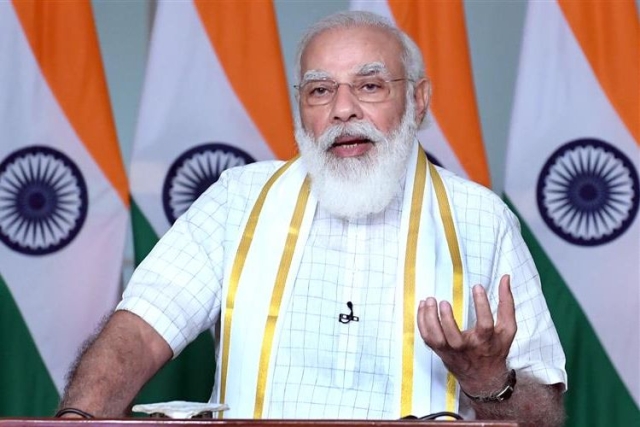 Prime Minister Narendra Modi will interact with CEOs of leading global oil and gas companies on Monday (26 October) in the annual roundtable event organised by NITI Aayog and Ministry of Petroleum and Natural Gas, the Prime Minister's Office (PMO) said on Friday (23 October).

India is an important player in the global Oil and gas sector, being the third-largest consumer of crude oil and the fourth-largest LNG importer.

Realising the need for India to graduate from a passive consumer to an active and vocal stakeholder in the global oil & gas value chain, NITI Aayog initiated the first roundtable of global oil & gas CEOs with the Prime Minister in 2016.

The growth of the event was apparent as around 45-50 global CEOs and key stakeholders who shape the global oil & gas sector assembled every subsequent year to interact and discuss the issues and opportunities with the Prime Minister.

The impact of the annual global CEOs' interaction can be seen in the gravity of discussion, quality of suggestions and the seriousness with which they are acted upon, an official statement said.

This will be the 5th such event organised by NITI Aayog and Ministry of Petroleum & Natural Gas, and around 45 CEOs of major oil & gas companies will attend this year.

The objective behind the meeting is to deliver a global platform to understand best practices, discuss reforms, and inform strategies for accelerating investments into the Indian oil & gas value chain. The annual interaction has gradually become one of the most important gatherings of not only intellectual debate but also of executive action.

The event also grows in stature with the rise of India, the world's third-largest energy consumer, which is likely to see over $300 billion investment by 2030 in the oil & gas sector to meet rising demand.

Petroleum and Natural Gas Minister Dharmendra Pradhan will give the opening remarks, which will be followed by a comprehensive presentation giving an overview of the Indian oil & gas sector, and explaining the ambition and opportunities in it.

This is to be followed by the interaction session with global CEOs and experts.

Prior to this, Prime Minister Modi will inaugurate the India Energy Forum by CERAWeek, now in its fourth year. It is hosted by IHS Markit, a world leader in critical information, analytics and solutions. The event will convene an international group of speakers and a community of over a thousand delegates from India and over 30 countries, including from regional energy companies, energy-related industries, institutions and governments.