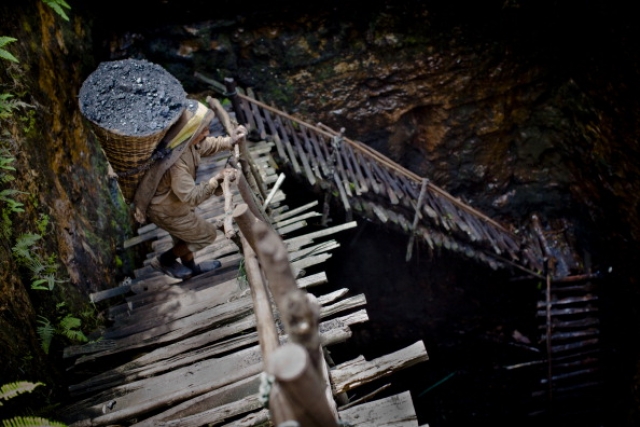 A coal mine worker in Meghalaya. Despite the NGT banning coal mining in Meghalaya, the state government was unable to curb it and now has received a Rs 100 crore fine. (representative image) (Photo by Daniel Berehulak/Getty Images)

The Meghalaya Government has been fined Rs 100 Crore by the National Green Tribunal (NGT) for failing to keep a check on the illegal coal mining in the state, the Times of India reports.

According to a senior lawyer who is helping the NGT in the mining issue, as an ‘amicus curiae’ (friend of the court), a high-level committee had submitted a report on 2 January to a bench headed by NGT chairman AK Goel. In the report, it was stated that most of the mines in the state operated without a lease or a licence.

Hence, the tribunal handling expeditious disposal of the cases related to environmental issues has imposed Rs 100 crore fine. The NGT states the Meghalaya government is a "deterrent" because of its "inaction" to control the illegal mining in the state.

The lawyer also said that the state government had acknowledged many mines were operating illegally in the state during the hearing. The decision comes after 15 miners were trapped since 13 December in a 370 foot-deep illegal coal mine in Lumthari, East Jaintia Hills district, Meghalaya.

Also read: Meghalaya Mine Tragedy: Why The Congress Has To Take The Blame For It

Despite the state government spending over Rs 50 lakh to hire various utilities to save the miners and various rescue missions from NDRF and the Indian Navy, all the efforts to pump the water that is flooded in the mine have failed so far. Krip Chullet, the owner of the illegal rat-hole mine, was arrested on 14 December.

Recently, the Supreme Court also expressed its unhappiness over rescue operations and ordered the state government to bring out the miners dead or alive.