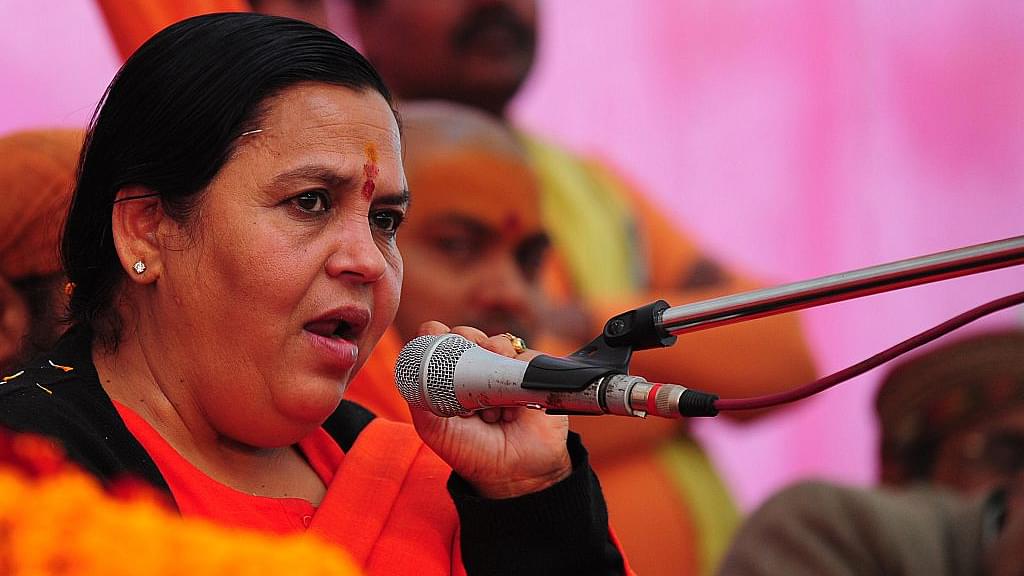 The Congress demanded Uma Bharti’s resignation on charges of conspiracy, but she in turn slammed them. (Sanjay Kanojia/AFP/Getty Images)

After criminal conspiracy charges were levelled against her, Union minister Uma Bharti today (20 April) refused to resign and declared that she was a proud participant in the Ram Janmabhoomi movement. “I am proud to have been associated with the Ram Janmabhoomi movement. For me, Ayodhya is not just about politics, but a matter of belief for me. Due to the media, I thought my going there would become a political event and not a personal one,” Bharti said.

Further, Bharti added that she has no regrets over her involvement in the case. “I am ready for all kinds of questions at the shortest notice. I have no regrets over my involvement. The temple would definitely be built,” she added.

The Congress demanded Bharti's resignation by reminding Prime Minister Narendra Modi to act in accordance with 'his love for transparency and morality in politics'. However, it’s telling how the Grand Old Party has exercised restraint in its charge - a clear indication of the political situation they find themselves in, characterised by the Bharatiya Janata Party’s electoral surge, riding, possibly, on a wave of strong Hindu sentiment.

Earlier, the apex court allowed the CBI's appeal in the Babri Masjid demolition case and restored criminal conspiracy charges against Uma Bharti, L K Advani, Murli Manohar Joshi and Rajasthan Governor Kalyan Singh. However, Kalyan Singh, who was the chief minister of Uttar Pradesh in 1992, enjoys constitutional immunity as the Rajasthan Governor and can be tried only after he leaves office.

The Supreme Court has directed the trial court in Lucknow to commence the proceedings in four weeks and hear the matter on a day-to-day basis so as to complete the hearing in two years. There will be no 'de novo' (fresh) trial, it said.