Punjab: Man Drags Cop On Car’s Bonnet For Trying To Stop The Car During Lockdown; Booked For Attempt To Murder 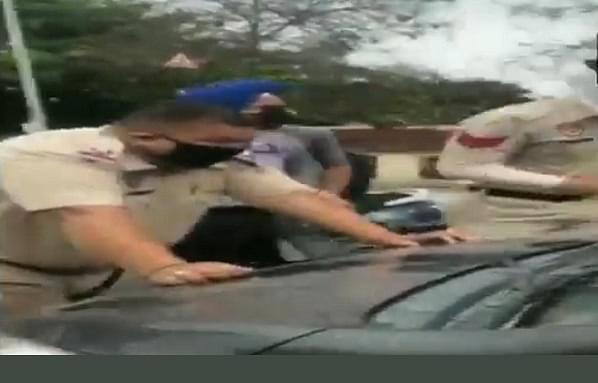 In a shocking incident, a man in Jalandhar district of Punjab dragged a police officer on his car's bonnet, reports ANI.

The incident took place on Saturday (2 May) when the police stopped the car owner asking him to show his curfew pass amid the coronavirus lockdown.

In the video shared by ANI, it can be seen that youth drags a policeman, identified as ASI Mulkraj, on his car's bonnet while the cop holds the car’s bonnet.

#WATCH Punjab: A car driver drags a police officer on car's bonnet in Jalandhar, after the officer tried to stop the vehicle today, amid #COVID19 lockdown. pic.twitter.com/IZUuTHapsK

Speaking to ANI, Investigating officer Suresh SInghr said: “A car approaching Milkbar Chowk was asked to stop by the police, but the driver didn’t stop the car. ASI Mulkraj, who was on duty there climbed the car’s bonnet when it didn’t stop. The driver dragged the ASI to some distance.”

He added that Additional SHO Gurudev Singh and other officials followed the car and stopped it after 150-200m.

The DGP of Punjab police said that the car driver Anmol Mehmi has been booked for attempt to murder.