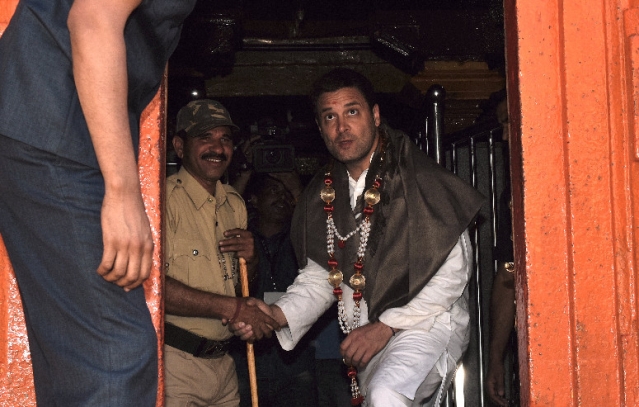 Continuing his temple run ahead of polls, Congress president Rahul Gandhi, along with other senior party leaders, visited Shringeri Sharadamba Temple in Karnataka's Chikmagalur district on Wednesday, Times of India has reported.

During his visit to the temple, a pitch at soft Hindutva, Rahul Gandhi was reportedly “impressed” by Tipu Sultan’s “help” to the temple during its hour of crisis and called the Muslim ruler a symbol of communal harmony.

Gandhi, dressed in traditional temple attire of a dhothi and shalya, met Sringeri mutt pontiff Bharati Tirtha Swami and interacted with students of Sadvidya Sanjivini Sanskrit Mahapathashala at the mutt. He promised to promote the ancient language if his party comes to power at the Centre in 2019.

“He assured of possible support from both the state and the Central government to promote Sanskrit and manuscripts. He assured us of a special package and a dedicated institute,” a student was quoted by the daily as saying.

The Congress leader had visited multiple temples in Gujarat during his campaign in the state for assembly polls earlier this year and seems to be using the same strategy ahead of the assembly election in Karnataka.

Rahul’s assertion that Tipu was secular is likely to trigger a war of words between the Congress and the Bharatiya Janata Party (BJP). The BJP had in 2017 opposed the Congress-led state government’s decision to celebrate the birth anniversary of the Mysuru ruler and labelled him communal.

A Tale Of Two Rulers: Secular Lies About Tipu Sultan

Kodavas Want Spotlight On Genocide Inflicted Upon Them By Tipu Sultan