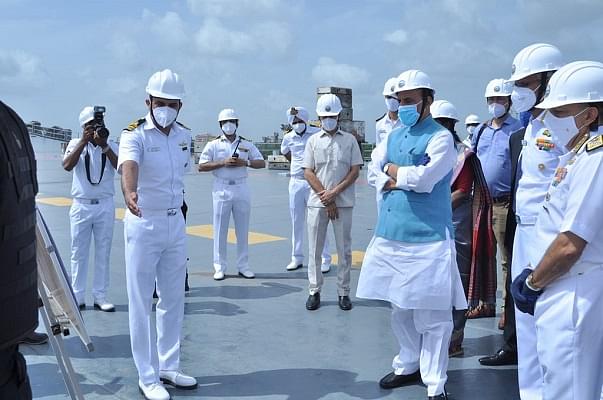 The Defence Minister visited the construction site and was briefed about the successful Basin Trials completed during November 2020. He was also apprised of the progress achieved on integrating several other navigational, communication and operational systems as it prepares for its maiden Contractor Sea Trials (CST), which is expected in the forthcoming months.

The IAC would be commissioned as INS Vikrant in the first half of 2022, the most potent sea-based asset. The ship shall operate MiG-29K fighter aircraft, Kamov-31 Air Early Warning Helicopters, the soon inducted MH-60R multi-role helicopter and the indigenously manufactured Advanced Light Helicopters.

"It would offer an incomparable military instrument with its ability to project air power over long distances, including Air Interdiction, Anti-Surface Warfare, offensive and defensive Counter-Air, Airborne Anti-Submarine Warfare and Airborne Early Warning," the Ministry of Defence said.

Rajnath Singh stated that IAC has nearly 75 per cent indigenous content - from design to steel used in construction to key weapons and sensors. He recalled a recent approval accorded by the Defence Acquisition Council for RFP of Project 75-I under the Strategic Partnership model, which will give further fillip to the indigenous development of niche manufacturing technologies. He said the commissioning of IAC would be a befitting tribute to 75 years of India's independence.