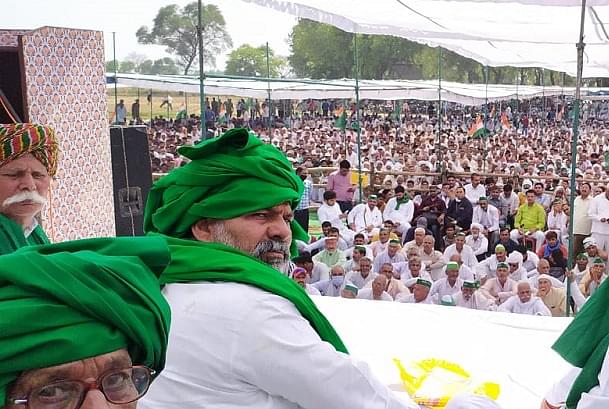 Bharatiya Kisan Union (BKU) leader Rakesh Tikait on Wednesday (26 May) said that prolonged protests will hurt BJP's chances in the assembly elections of Uttar Pradesh that will be held in 2022.

While speaking to journalists in a virtual meeting organised by the Indian Women's Press Corps (IWPC), the leader of the protesting farmers said that, if necessary, they are willing to continue their agitation till 2024 when the next general elections take place.

“I am neither a Jat leader nor a politician, but I know that the state of farmers is not good in UP, and they are all with us. Be it sale of produce or the state of sugarcane farmers, or even electricity, there are issues that we will take to people,” Tikait said when asked whether RLD leader Ajit Singh's death has created political space for him, reports The Economic Times.

Recently, twelve opposition parties, led by the Congress, have extended their support to the call given by the Samyukta Kisan Morcha (SKM), an umbrella body of over 40 farm unions, for a countrywide protest on 26 May to mark the completion of six months of their agitation against the Centre's three farm laws.

Farmers, particularly from the states of Punjab and Haryana, have been protesting for the last six months by blocking the highways leading to Delhi. They are demanding the repeal of three agriculture reform laws enacted by the Modi government.

The three laws are Farmers’ Produce Trade and Commerce (Promotion and Facilitation) Act, 2020, the Farmers (Empowerment and Protection) Agreement on Price Assurance, and Farm Services Act, 2020, and the Essential Commodities (Amendment) Act, 2020.