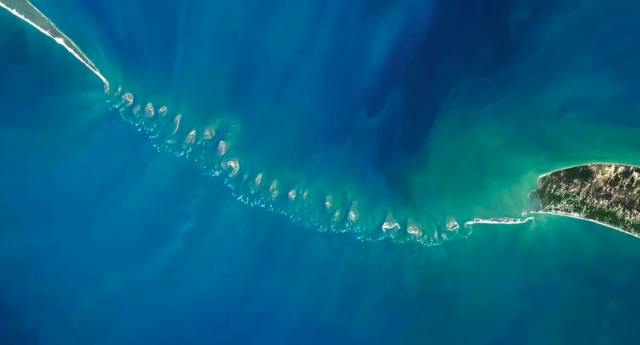 The Ram Sethu. (screengrab from video)

In an affidavit to the Supreme Court, the Central government today (16 March) said that it wouldn’t damage the Ram Sethu for its Sethusamudram Ship Channel project, Times of India has reported.

Responding to the PIL filed by Subramanian Swamy, the Centre has said that damaging the historical structure would not be in the ‘interest of the nation’ and has potential socio-economic disadvantages for the country.

Today SC was told by Govt Ram Setu will not be touched. I finally after 20 yrs have concluded my case listed Transfer WP No. 26&27 of 2006

The Sethusamudram project was initiated by the erstwhile Congress government at the centre, which would’ve entailed dredging the shallow channel between India and Sri Lanka to create a navigable channel.

However, the bridge, said to be built by Lord Ram, is of religious significance to Hindus and Swamy had filed the PIL for its preservation.

In the affidavit filed with the Supreme Court in the matter, the centre has said "That the government of India intends to explore an alternative to the earlier alignment of Sethusamudram Ship Channel project without affecting/damaging the Adam's Bridge/Ram Sethu in the interest of the nation."

Several studies are being conducted to ascertain if the bridge, also called Adam’s bridge, is indeed man-made, with a latest one by the US-based Science Channel claiming that it actually might be.

Are the ancient Hindu myths of a land bridge connecting India and Sri Lanka true? Scientific analysis suggests they are. #WhatonEarth pic.twitter.com/EKcoGzlEET