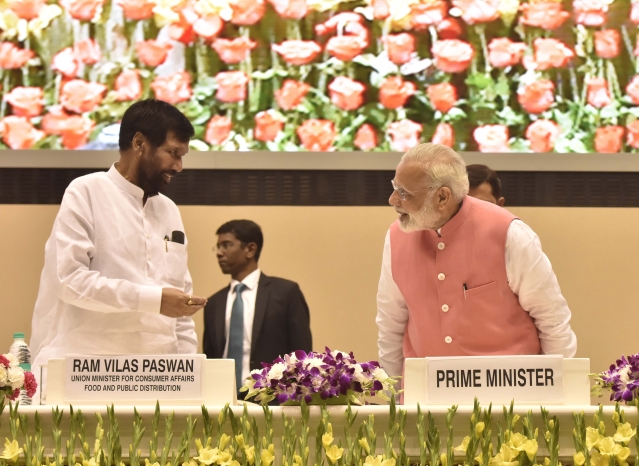 Union Minister for Consumer Affairs, Food and Public Distribution and Lok Janshakti Party (LJP) president Ram Vilas Paswan today (3 December) said that his party was planning to write to Prime Minister Narendra Modi to amend the constitution to pave the way for reservation in promotions.

The LJP chief said that the issue had figured prominently at the party's foundation day celebrations last week and party members have decided to work in this direction.

issue of reservation in promotions has been lingering since the implementation of Mandal Commission report in 1990. We have consulted legal experts to find out ways to introduce the provision after taking into account the conditions laid down by the Supreme Co

-Lauding the new tax regime, Paswan said that the Goods and Services Tax (GST) regime will ensure availability of essential items to the people at affordable rates.

However, he admitted that rising prices of onions was a cause of concern and claimed that the situation will ease out soon.

The LJP chief also criticised Congress vice president Rahul Gandhi for "resorting to temple visits" before Gujarat elections and said, "The BJP will get a thumping majority in the assembly polls in Gujarat as the people of the state are elated over the international stature PM Modi is enjoying".

He also lambasted RJD MLA Tej Pratap Yadav for threatening to skin PM Modi if something happened to his father and party chief Lalu Prasad due to their downgraded security cover.

"This shows the values Lalu has passed on to his next generation. The entire family is involved in corruption cases and yet they have the audacity to make so much of noise," Paswan said. PTI