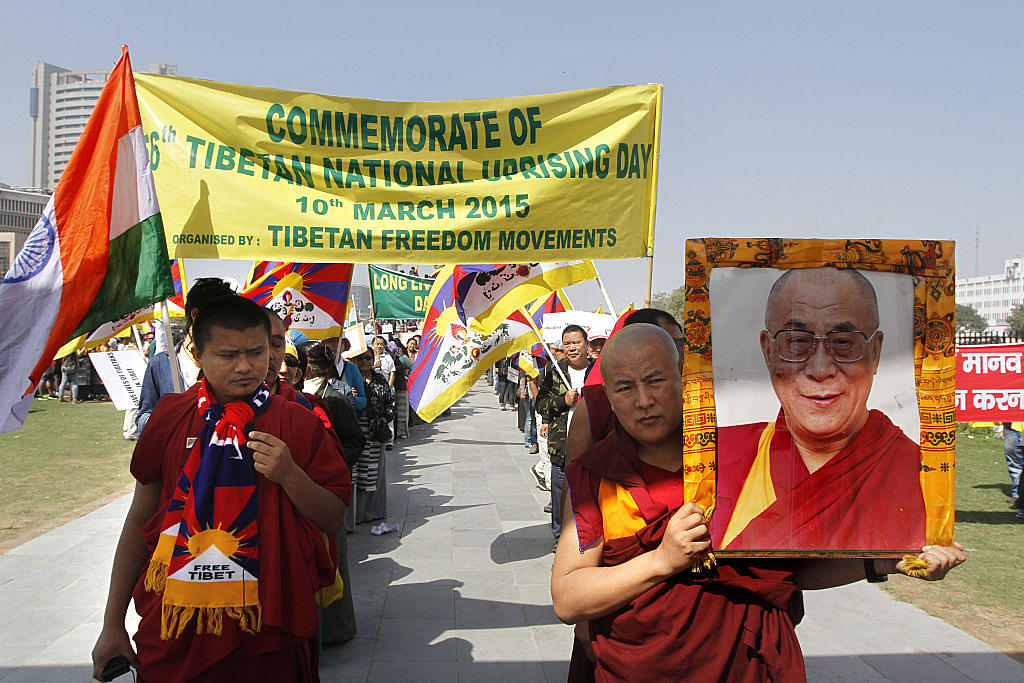 Exiled Tibetans monks hold the portrait of Dalai Lama during a protest march in New Delhi marking the anniversary of a failed 1959 uprising against China’s rule in Tibet. (Virendra Singh Gosain/Hindustan Times via Getty Images)

A rattled China on the defensive due to the military setbacks on the border has now accused India of playing the Tibet card.

Chinese outlet, Global Times aligned with the ruling Communist Party reported, "While for India, colluding with the exiled Tibetan and playing the Tibet card is only shooting its own foot, as China's economic power and military strength are much greater than India's," an analyst said.

In a sense, China has dared with its economic and military power and tried to send India a message on the issue of "collusion with exiled Tibetan" leadership.

"The latest border confrontation between China and India has brought under spotlight an Indian force unit, composed of the exiled Tibetans who some Indian media believe formed an "elite unit" and played an "important role" in the latest standoff triggered by India's provocative actions," Global Times said in a report.

"However, according to Chinese analysts, this so-called Special Frontier Force (SFF), numbered at most 1,000, was far from being "elite" and was only used by Indian army as cannon fodder in the border clash," the report said.

As per the report, Qian Feng, director of the research department at the National Strategy Institute at Tsinghua University, told the Global Times that Indian army deployed the unit of exiled Tibetans to conduct the preemptive actions, but according to Indian media, the action resulted in one death and injuries to another commander, which fully reflects Indian forces' insufficient preparations.

"One death and injuries to another commander in this non-war military action showed that the SFF was not that 'special', and far from being elite. They were only used by Indian army as cannon fodder," Qian said.

The SFF was first formed with the support of the US in the 1960s as the exiled Tibetans had high-altitude combat capabilities. They were later used by India to spy on Chinese military, according to Qian.

"At present, the SFF's importance has declined significantly in Indian army and it no longer plays any important role. The number of the unit has also dramatically reduced, and at present the unit has at most 1,000 offspring of the exiled Tibetans," he said.

"Indian army does not trust foreign soldiers, thus most of the ethnic Tibetans had very low status in the military. Becoming a member of the unit was only their means to make a living," Qian said, as per Global Times.

As per Global Times, analysts said that Tibetan "government-in-exile" has faded into obscurity and cannot make any waves internationally. It only used the China-India border confrontations as an opportunity to get a little bit of attention.

The story has been published via a syndicated feed, only the headline has been changed.