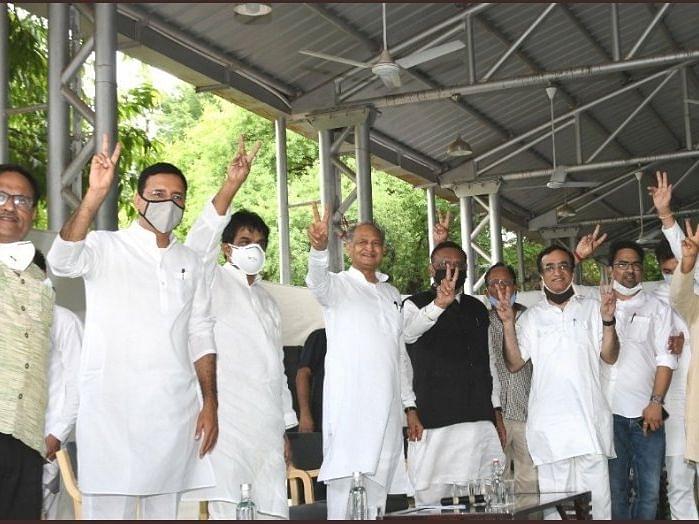 Soon after the culmination of the Congress Legislature Party (CLP) meeting at the Chief Minister (CM)'s residence in Jaipur on Monday (13 July), Rajasthan Congress MLAs were sent to the Fairmont Hotel on the Delhi-Jaipur highway after the party passed a resolution raising a demand to punish "anti-party elements".

Fairmont is the same hotel which was raided by I-T sleuths on Monday morning.

Four buses were parked outside the Chief Minister's residence which took the MLAs to the hotel as part of the resort politics to keep the Gehlot camp's flock safe amid the rising crisis posed by Chief Minister Ashok Gehlot's sulking deputy Sachin Pilot who declared on Sunday that the Gehlot government is in a minority.

However, brushing aside Pilot's claims, Gehlot showed majority numbers and flashed a victory symbol as over 100 MLAs stood with him.

The party also passed resolution against the BJP on Monday after the CLP meeting and said that it strongly condemns "attempts to kill democracy".

"This ripping off of democracy by BJP is insult to 8 Cr people of Rajasthan, they'll not accept it. CLP meet expresses its confidence in Congress Pres Sonia Gandhi & leader Rahul Gandhi, & unanimously supports the govt led by Ashok Gehlot," read the resolution as tweeted by news agency ANI.

It said that people behind anti-party acts should be punished as it criticised any kind of "undemocratic act" which maligns the party' image.

"This meet urges that strict disciplinary action be taken against any office bearer or member of Legislative Party who indulges in activities against the Congress govt, party or gets involved in any conspiracy," the resolution added.

Earlier, a whip was issued for all MLAs to attend the meeting, however, Pilot and his flock of 18 MLAs were missing from the meeting.