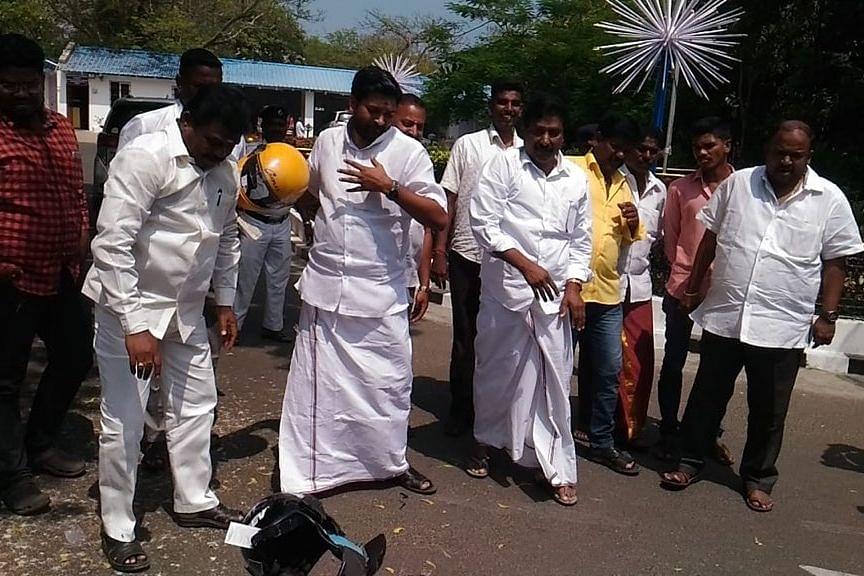 The legislators of All India Anna Munnetra Kazhagham (AIADMK) on Tuesday (12 February) broke helmets in the Puducherry assembly premises to protest against the rule, that made wearing helmets mandatory, without creating awareness on its use, reports India Today.

The protest was also staged to condemn Puducherry’s Lieutenant Governor (LG), Kiran Bedi’s action to implement the rule and criticise her style of functioning which according to the MLAs is arbitrary.

A helmet each was reportedly brought and smashed on the floor by the leader of AIADMK in the legislature, A Anbalagan and his colleagues A Baskar and Vayyapuri Manikandan.

According to the report, LG Kiran Bedi on Sunday (10 February) said the territorial law secretary had requested the Madras High Court to deploy a mobile magistrate traffic court in Puducherry to make sure that motorcyclists wear helmets.

“It is now time and opportunity for relentless adoption of the rule by law enforcement agencies to bring down fatalities on roads. There shall be no relaxation, exceptions and interference regarding enforcement of the helmet rule,” Bedi was quoted in the report as saying.

Bedi, after the incident at the assembly, accused the legislators of violating Madras High Court and Supreme Court’s judgements.

The police department of the UT on Saturday (9 February) had announced that wearing helmets would be mandatory from 11 Feburary, and those who violated the rule would be fined Rs 100.

According to the report, Chief Minister V Narayanaswamy had earlier urged the department to implement the rule after creating awareness on the benefit of wearing a helmet. However, Bedi said that the Chief Minister was trying to scuttle implementation of the helmet rule.