Sameet Thakkar Tied With Rope, Face Covered In Black Cloth Gets Taken To Court For Tweets On Uddhav, Aditya Thackeray 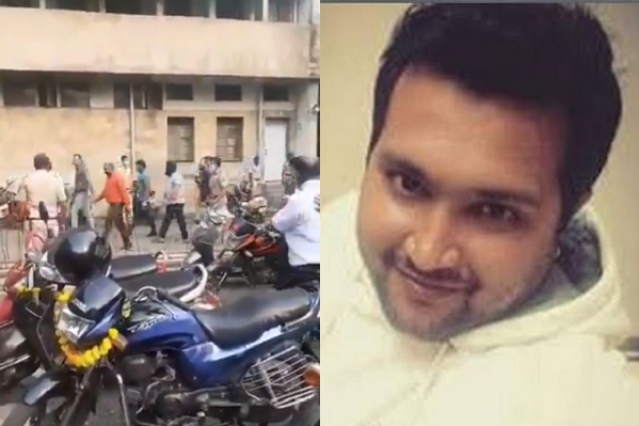 Prominent twitter user Sameet Thakkar who was arrested for his comments against Uddhav and Aditya Thackeray can be purportedly seen being led to a court while being tied to a rope with his face being covered with a black cloth in a video released by his family.

Thakkar was arrested on 24 October for his tweets which allegedly termed Uddhav Thackeray a - modern day Aurangzeb and his son and fellow minister Aditya Thackeray a baby penguin.

It's human rights' violation by police as my brother's hands were tied & face was covered with black cloth when he was brought to court today. They treating him the way hardcore terrorist is treated: Rishi Thakkar, Sameet Thakkar's brother to ANI

In the video Thakkar can allegedly be seen being led while being tied to a rope. His face was also covered by a black cloth.

Social media users including BJP leaders like Varun Gandhi and Kapil Mishra expressed shock at the treatment being meted out to Thakkar.

Is @thakkar_sameet a terrorist, is he an animal, is he a danger to the nation that heâs being treated in this manner? This goes against every tenet of humanity. Irrespective of political views, it is completely unlawful & immoral.All of us should be raising our voice against this pic.twitter.com/tUkrktUPgF

What is happening with @thakkar_sameet ?

Need to unite, Need to form teams and groups

Need to have a legal , social network that can protect brave Indians

Time to change this

Does he belong to any terrorist organization?

The video of @thakkar_sameet being dragged with a rope tied to his hand is a disturbing and disillusioning visual @BJP4India @AmitShah @India_NHRC @AmitShahOffice @JPNadda @Dev_Fadnavis why is he being treated like this, is there no one left to speak for him?

This is totally inhuman treatment of @thakkar_sameet

Why this shaming and taking him like a hardened criminal.

What is his fault ?

A Nagpur court today extended Thakkar's police custody till 2 November, his family has alleged that he is being treated in the same was as a hardened terrorist would be.

The complaint against Thakkar was made by a Mumbai resident known Dharmendra Mishra who calls himself the legal head of Yuva Sena and is also a legal consultant for Shiv Sena. Another complaint has been filed against Thakkar in Nagpur by a different Shiv Sena leader.

Following the complaint, Thakkar had approached the Bombay High Court seeking a quashing of the FIR but the court ordered him to approach the V P Road police station in Mumbai and record his statement.

Thakkar subsequently went to the police station on 5 October but reportedly left the building in the middle of the questioning. He later told the High Court that he feared the cyber-cell cops may arrest him.