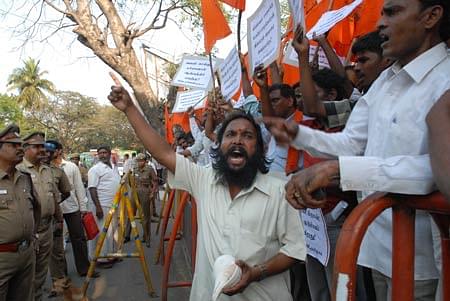 Senior Hindu Munnani official in Tamil Nadu, C Sasikumar, was murdered only after the police had withdrawn protection provided to him a couple of weeks ago, said a union minister, accusing the state government of negligence.

Minister of State for Shipping, Road Transport and Highways Pon Radhakrishnan said the police provided protection to Sasikumar for a year and had withdrawn it 15 days ago, which resulted in his murder.

Earlier this month, Tamil Nadu saw attacks on three Hindu nationalist activists. At least two of these attacks (one victim killed and another reportedly grievously injured) are suspected to have been the handiwork of hardcore Islamist organisations operating out of Tamil Nadu.

While the two attacks, one in Dindigul district and the other in Coimbatore, may seem unrelated, right-wing activists in Tamil Nadu believe Islamist elements could be targeting political rivals across the state.

Radhakrishnan said if the police had given protection this tragedy could have been averted.

“It is time that police take serious efforts and arrest the killers. The police should also take steps to prevent such incidents in future and provide protection to Hindu leaders,” he said.

“Top priority must be given to trace and arrest the culprits,” the DMK chief said.

Meanwhile, the special investigation team which is looking into the killing has not made any headway despite questioning more than 500 people and recording the statements of another 100.