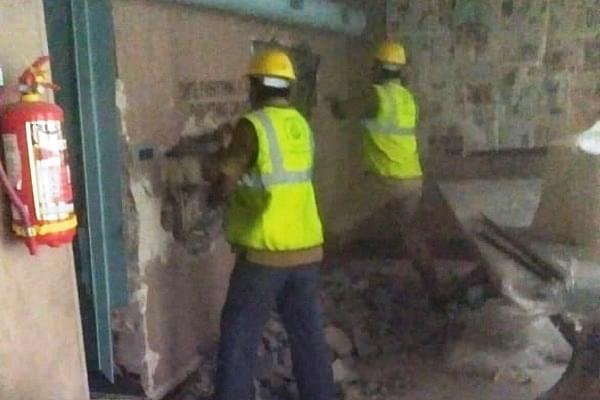 A team of the BMC H-West Ward officers accompanied by a police posse reached the office with bulldozers, JCBs and other heavy equipment and took up the demolition work from the outside.

The development came barely hours after the BMC pasted a notice outside the office rejecting a reply filed by Kangana's lawyer, Rizwan Siddique, to the Tuesday (September 8) notice in which the civic body had listed a series of violations in the ongoing works in her office.

Kangana went on to share more pictures of the demolition drive and said that this action proves her statement that Mumbai is now PoK.

She went on to deny any illegal construction having taken place at her office and added that, "Bullywood watch now this is what Fascism looks like".

There is no illegal construction in my house, also government has banned any demolitions in Covid till September 30, Bullywood watch now this is what Fascism looks like ð#DeathOfDemocracy #KanganaRanaut

As per the BMC notice, the violations include: merging of two bungalows, converting a ground-floor toilet into an office cabin, converting a storeroom into a kitchen, making an unauthorised pantry in the ground floor, adding toilets near the storeroom and a parking area, illegal partitions in first floor living room, an illegal meeting room in the "puja" room, converting a balcony into a habitable area besides a floor extension, etc.

The latest development came two days after a BMC team paid a surprise visit to her office. Kangana has maintained that this action is a result of her ongoing war of words with Shiv Sena.