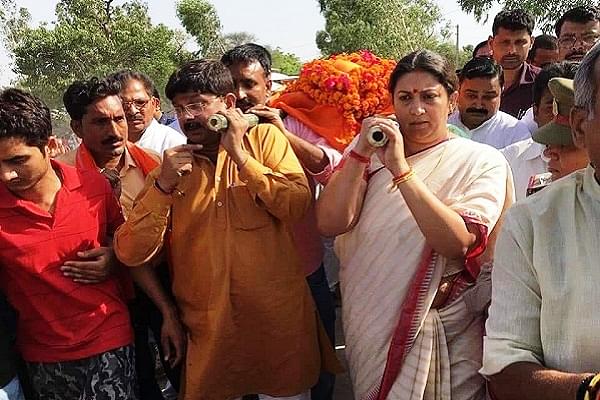 Senior BJP leader Smriti Irani on Sunday (27 May) lent a shoulder to the mortal remains of her close aide Surendra Singh who was shot dead in Amethi’s Baraulia by unknown assailants in the wee hours of the day.

Singh, the former village head of Baraulia was instrumental in her campaign to distribute shoes to the underprivileged members of the community. This campaign had incurred the wrath of party general secretary Priyanka Vadra who had called it an insult to the people.

After his death, Irani rushed to Amethi and lent a shoulder to his mortal remains.

Subsequently, Irani vowed to punish the culprits and asserted that she would move to the Supreme Court if she had to for ensuring death penalty.

"I have taken a vow before Surendra Singh ji's family. The one who fired at him and the one who ordered it.... even if I have to go to Supreme Court to seek death sentence for them, I will knock the doors of the court”, ANI quoted Irani as saying.

The widow of Singh has claimed that he was murdered for campaigning for the BJP and his son has alleged the involvement of Congress leaders in the matter.