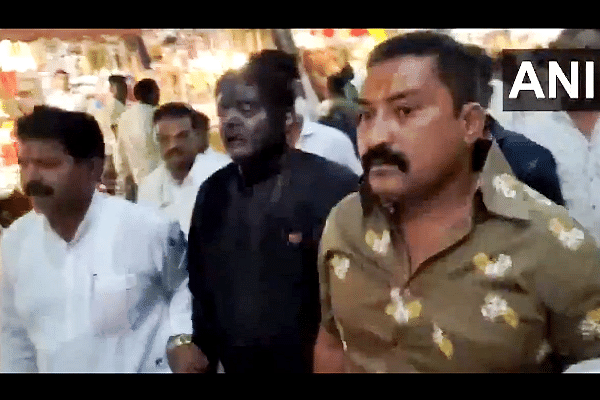 BJP leader in the centre with his face blackened (ANI)

This attack came after Katekar had said in a speech that Thackeray is unfit to rule the state. The enraged Shiv Sainiks then caught Katekar on Solapur's streets, poured black ink on his face and started parading him on the streets.

A video of the incident was shared by ANI.

#WATCH I Maharashtra: Shiv Sena workers allegedly pour black ink on a BJP leader and forced him to wear a saree after the latter criticised Chief Minister Uddhav Thackeray, in Solapur pic.twitter.com/gdtL9gChT1

In the video the Shiv Sena workers can be seen parading the BJP leader as a few of them begin assaulting him and force him to wear a saree. They then start chanting pro-Shiv Sena slogans as a solitary cop haplessly tries to take the BJP leader to safety.

Following the incident the Shiv Sena workers have taken responsibility for the attack and have said that they are ready to go to jail but will not tolerate anything against their "revered" Uddhav Thackeray.

"It was Katekar who used objectionable words against our chief. For Sena workers, Uddhavji is a revered figure and we will not tolerate anything said against him. We take responsibility for this attack and are ready to go to jail for our action", said Shiv Sena leader from Solapur Purshottam Barde.