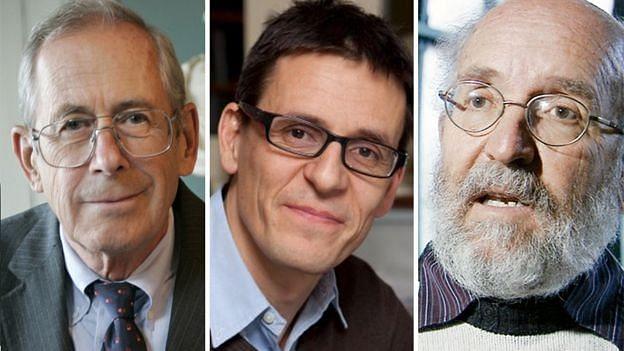 The 2019 Nobel Prize in Physics Winners. (via ESA/Twitter)

The 2019 Nobel Prize in Physics was shared by three scientists, the Royal Academy of Sciences in Stockholm announced on Tuesday (8 October).

The 2019 Nobel Prize in Physics has been awarded with one half to James Peebles "for theoretical discoveries in physical cosmology" and the other half jointly to Michel Mayor and Didier Queloz "for the discovery of an exoplanet orbiting a solar-type star", Xinhua news agency reported.

BREAKING NEWS:
The 2019 #NobelPrize in Physics has been awarded with one half to James Peebles âfor theoretical discoveries in physical cosmologyâ and the other half jointly to Michel Mayor and Didier Queloz âfor the discovery of an exoplanet orbiting a solar-type star.â pic.twitter.com/BwwMTwtRFv

Tuesday's announcement comes after it was revealed on Monday that three Americans scientists, William G Kaelin and Gregg L Semanza and Briton Peter J Ratcliffe, were awarded the Nobel Prize in Medicine.

Monday's announcement kicked off this year's prestigious awards, which was followed by prizes in Physics on Tuesday and the ones for Chemistry, Literature, Peace and Economics will also be named in the next few days.

This edition will see two prizes in Literature being announced as an exception, as last year's were postponed owing to allegations of sexual abuse within the Swedish Academy.

The awards will be presented on 10 December, the anniversary of the death of its founder Alfred Nobel, in a double ceremony at the Konserthus in Stockholm and Oslo City Hall, for the Peace Prize.

All prizes include a cash prize, which this year amounts to 9 million Swedish kronor ($912,000)