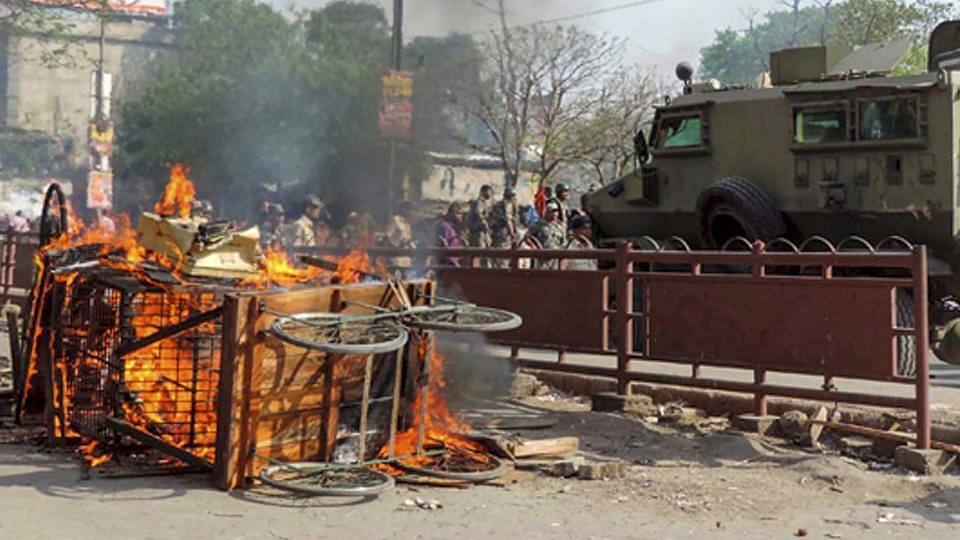 Clashes during a Ram Navami procession in Aurangabad. (PTI)

Prohibitory orders were issued and internet services were suspended for 24 hours in Bihar’s Aurangabad after stones were pelted on a Ram Navami procession in the town injuring over a dozen people, Hindustan Times has reported.

Communal clashes and arson that began on Sunday spilled over on Monday as two communities clashed again on the issue of stone pelting.

According to the local police, the procession targeted by stone pelters had proper permission and was passing through pre-determined route.

"The procession was authorised and was passing through pre-determined route in presence of magistrates and security personnel when stone pelting took place on it," District Magistrate Rahul Ranjan Mahiwal said.

Gun fire and bomb blasts were also reported in the town as violence spread to other parts. While a mob set more than two dozen small and big shops on fire in the busy Sabzi Bazaar area of the town, another mob ransacked five shops in the Maharajganj locality. Mobs also targeted business establishments and residential properties located in Sinha Social club, Nawadih, Ganj Mohalla and Ramesh Chowk.

While the district administration issued prohibitory orders under Section 144 in the entire town, a curfew was not imposed. Central Reserve Police Force was deployed in some parts of the town to prevent violence from spreading.

“More than 50 peoole have been taken into custody,” the District Magistrate said, adding “the situation is under control.”

“We have intensified patrolling in the area. CCTV footage is being examined to identify culprits and FIRs would be lodged against them,” he added.

Stone pelters targeted another Ram Navami procession passing through the town's Nawadih Colony. A mob set ablaze more than 20 shops in this area.