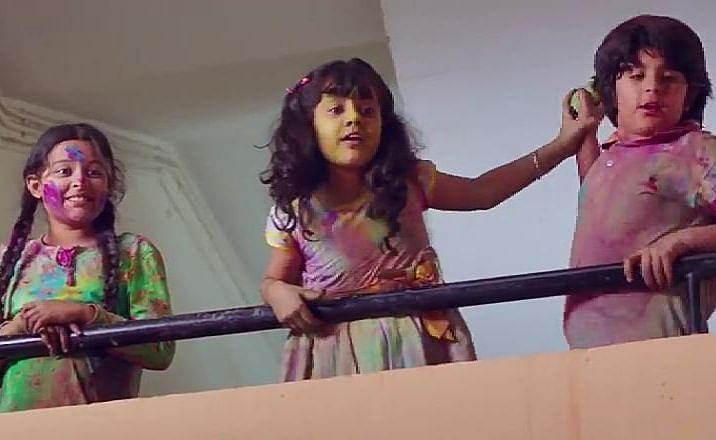 A snippet from the Surf-Excel advertisement (pic via Twitter)

In a recent advertisement, Surf Excel shows a young Hindu girl in white T-shirt protecting a Muslim boy from Holi colours as he has to go to mosque for namaz. The advertisement is being criticised widely on social media, with #BoycottSurfExcel trending.

Twitterati accused the ad of promoting ‘Love Jihad’. Surf Excel was accused of being insensitive to the history of Hindu persecution in the subcontinent and promoting an ideological agenda in the garb of a ‘feel-good’ 1-minute clip. People also criticised Surf Excel for exploiting the notion of ‘innocence of children’ for virtue-signalling.

This is not the first time that Hindustan Unilever (HUL) has faced flak for showing an advertisements deemed Hinduphobic. Previously, in its Kumbh Mela advertisement, the company showed a Hindu man abandoning his old father in the Mela crowd to get rid of him, but he soon realises his mistake and comes back.

Many users put the advertisement on the same lines as a large-body of Indo-Islamic text corpus that includes Persian, Urdu poems on the mystery of love, exclusively between a Muslim boy and Hindu girl.

Scholars point out that these poems had an obvious proselytising goal, glorifying the Muslim boy’s struggle against the Hindu relatives of the girl, who represented narrow-mindedness and social restrictions to be destroyed by the heroic Muslim boy, while the Hindu girl symbolised the weak yet desirable creature to be saved. In many such poems, the culmination was subject’s conversion to Islam, transforming their previous deviant behaviour as infidel to a manifestation of “true love”.

Such works of art, the scholars argue, represented the a victory of Islam over the Hinduism. Many agreed that while works of art can be enjoyed equally by anyone irrespective of religion, their themes are often grounded in serious historical realities that cannot be ignored.

While some Twitter users chose to bring out the perspective on historical injustices, others chose to respond in a different way. Many shared a picture on the same theme as the advertisement, of Hindu boy applying Holi colour on Muslim woman, saying “because religion has no colour”. Others replaced Holi with Ramazan, showing a Muslim woman protecting a Hindu boy from the loud noise of mosque-speaker as he goes for meditation.

Many users also pointed out the advertisement continues the tradition of non-Indic cultures deriding Hindu festivals as inferior and uncivilised, albeit subtly. The issue also generated a widespread debate on stereotypes of Hindus, Muslims and Christians as shown in popular media.

Twitterati also expressed disappointment that all the mainstream news channels unfairly labelled their protests as those against ‘Hindu-Muslim harmony’ without giving space to their arguments, completely missing out on the nuances of the subject.