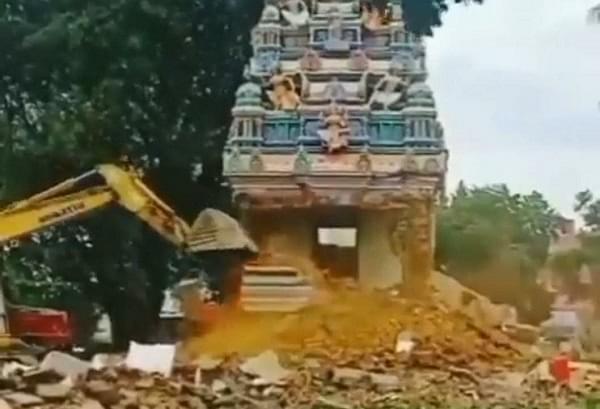 In a controversial move, Coimbatore Corporation on Tuesday (13 July) demolished seven temples present on the northern bund of the Muthannankulam tank of the city.

The Corporation had taken up this lake for rejuvenation and development under the Smart Cities Mission.

In 2020, around 2,400 families were removed from the tank bund after demolishing their houses for encroachment of the lake. They were provided alternative housing in the Tamil Nadu Slum Clearance Board projects.

Coimbatore Authorities have Demolished 7 Temples in Tank bund, Muthannankulam after Relocating aprox 300 Families from 14 Acre area by marking it as Enchroachedpic.twitter.com/Abs9p5xkHZ

The Corporation sources said that the temples were demolished to free the Muthannankulam bund from all encroachments. The task was taken up after relocating the people to avoid law and order issues.

The netizens have been outraged against this on social media. A social media user claimed that one of the temples demolished is more than a hundred years old. Another user has questioned the status of over five lakh acres of temple land encroached in Tamil Nadu by government and private parties.