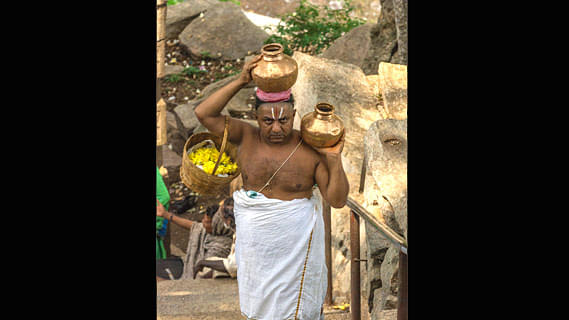 Temple priests in Tamil Nadu have knocked at the doors of the Madras High Court as their pleas to the Hindu Religious and Charitable Endowments (HRCE) department to address the issues of meagre salaries and their financial plight have fallen on deaf ears.

The Hindu reported that Periya Nambi Narasimha Gopalan, the head priest at Sri Rajagopalaswamy Kulasekara Azhwar Temple, Mannar Kovil, Ambasamudram taluk, and the 29th descendant of Acharya Periya Nambi, has filed a writ petition in the Madurai Bench of the Madras High Court.

While labour laws in the country mandate a three figure compensation per day, it is sad to know that the priests in most temples are paid only a three-figure salary for an entire month. The petitioner, as reported by the daily, is getting a monthly salary of Rs 750, and this is a three-fold increase from the Rs 250 that he was getting for almost a decade.

As the HRCE pays priests based on the money that their respective temples collect (not more than 40 per cent of the total income of the temple), most priests of smaller temples face a more worse fate as some of their salaries are less than Rs 100. The daily reports that Rs 19 is the monthly salary of a priest at the Vilvanathar temple in Pathamadai, and Rs 25 is what the priest at the historical and ancient Kailasanathar temple in Brahmadesam takes home each month.

Gopalan who has put together data on the salary paid to priests and other temple service personnel in close to 50 ancient temples in the Ambasamudram region, in his petition, said that low salary amounts to denying the priests the right to lead a decent life, which is a violation of Article 21 of the Constitution. “It falls on the Government to initiate steps in order to ensure the priests a decent living and minimum wages,” Narasimha Gopalan was quoted as saying. The report also quotes the president of the Temple Worshippers Society, T R Ramesh, as saying that the key issue is that the temples are sadly classified on the basis of their incomes and not on their religious significance.“They are not classified by how big the temples are and how many shrines they have nor based on the extent of immovable properties. Every Divya Desam and Thevara Sthalam should have adequate number of priests and that is possible only by giving the priests a reasonable monthly income and benefits. It is not right to have a salary cap of 40 per cent of the temple’s income and pay such shockingly low salaries to the priests.”

In his petition, Gopalan has pleaded with the Court to direct the HRCE to fix a pay scale for Archakas and others serving the temple directly. Any failure would have dire consequences, the priest argued, citing from the Thirukural to say ‘Aa payan kunrum aruthozhilor nool marappar kaavalan kavaan Enin’ — (If the ruler does not take care of his subjects and does not give them their fair dues, the cow count will decrease and the Brahmins whose job it is to chant and teach the Vedas will take up other jobs.)