The Communist Price For Devotion To Ayyappa: Rs 13 Lakh In Bail Charges, 2,061 Arrests And 452 Cases 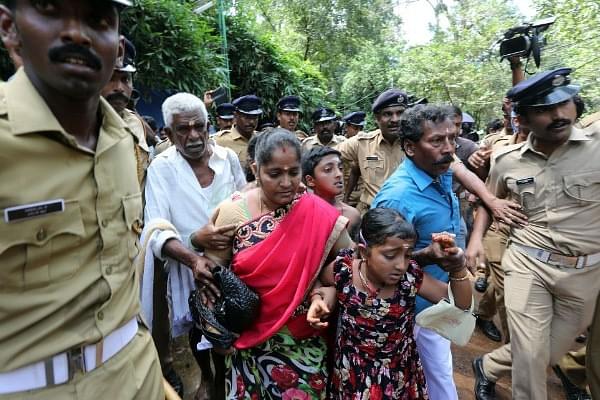 Those arrested in connection with the violence exhibited against women who tried entering Sabarimala temple in Kerala will have to bear a burden of paying anywhere between Rs 10,000 and Rs 13 lakh in order to get bail. One of the main charges of the state police is the protesters damaging public property such as police vehicles and state transport buses that belong to the Kerala government.

The ones who pushed the vehicle of Special Officer for Sannidhanam, S P Ajith, at Nilakkal will have to pay Rs 13 lakh for bail. Nine people have cases against them in relation to the incident, Manorama reported.

The crackdown on protesters has escalated by the day, as 700 people were arrested on Thursday (October 25). As of latest data, as many as 2,061 arrests have been made. More than 450 cases have been registered so far. The remainder of 1,000-plus suspects are being taken to task at the earliest by the special teams of state police formed across all the districts.

More than 1,500 people have been granted bail, but those who have engaged in the destruction of public property will have to face tough decisions of the court and pay up lakhs of rupees to get out on bail.