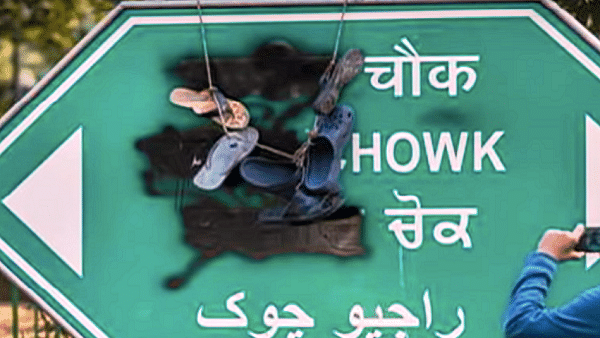 In the latest development in connection with the controversial demand to strip former prime minister Rajiv Gandhi of his Bharat Ratna, a crowd of Sikh protesters on Wednesday (26 December) vandalised a Rajiv Chowk signboard at Connaught Place in New Delhi, and demanded that the former prime minister’s Bharat Ratna be withdrawn and bestowed on freedom fighter Bhagat Singh, reports Deccan Chronicle.

The protesters called for Rajiv Chowk to be renamed after ‘Shaheed Bhagat Singh.’

"A Prime Minister of India represents all communities, be it Hindus, Muslims or Sikhs. We demand that considering Rajiv Gandhi's role in 1984 anti-Sikh riots, the Bharat Ratna award must be taken away from him, and should be conferred on Shaheed Bhagat Singh," one of the Sikh protesters stated.

This latest public assault on Gandhi’s legacy comes in the wake of the Delhi Assembly passing a resolution last week seeking the withdrawal of his Bharat Ratna for his alleged role in the anti-Sikh massacres of 1984. Recently, a statue of Gandhi was also targeted in Punjab, with vandals painting the structure’s hands red.

There is still immense anger entrenched within sections of the Sikh community against lacklustre progress in punishing the main perpetrators of the pogrom in 1984 which killed an estimated 2,800 Sikhs across India.

It was only after more than a three-decade long wait that veteran Congress leader Sajjan Kumar has been brought to justice by the Delhi High Court, being sentenced to life imprisonment for leading attacks on innocent Sikhs during the riots.