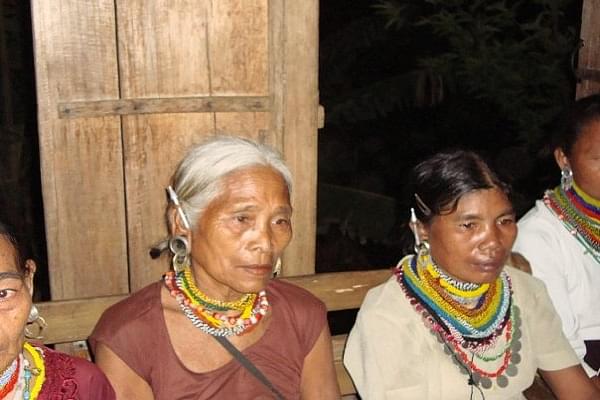 Members of the Bru tribe in Mizoram. (Photo by Banamallika Choudhury via Facebook)

In an unprecedented development since tens of thousands of ethnic Brus fled violence in Mizoram, the community has been able to cast their ballots at polling stations in the state during this year’s assembly elections, reports The Hindu.

Brus, a predominantly Hindu tribe also known as Reangs, were pushed out of their homes in Mizoram to refugee camps in Tripura in 1997 after the outbreak of ethnic violence.

Being an ethnic and religious minority, the Brus have been looked on as ‘outsiders’ in the state of Mizoram, where the largely Christian Mizos dominate. In the 1997 flare-up of large-scale violence against them, thousands of Bru homes were burnt, and a number of them were also killed and raped. The horrific episode of violence forced tens of thousands of them to flee to safety in neighbouring Tripura, where many still reside in refugee camps.

In January 2017, an organisation called the Bru Hindu Joint Coordination Committee had written to the Union Home Ministry to “safeguard the Hindu religion or indigenous faith of the Bru community in Mizoram.”

In previous elections, the displaced Brus were only able to exercise their votes in the Tripura camps, where Election Commission officials would visit them during elections. This previous voting arrangement was marred by allegations of manipulation and unlawful interference by both sides.

Mizo groups such as the Central Young Mizo Association (CYMA) had alleged that in the earlier process, ‘outsiders’ were being included in the state’s electoral rolls in the guise of conducting voting in the camps. On the other hand, a Mizo IAS officer Lalnunmawia Chuaungo was dismissed on the grounds of interfering in the polling process by obstructing the enrolment of new Bru voters.

However, in the recently concluded assembly elections in the state, 11,987 Bru voters were transported by the Tripura government to a special polling booth in the border village of Kanhmun in Mizoram from the refugee camps in Tripura. The primary beneficiary of the proper enfranchisement of the Bru tribe seems to have been the BJP, which has seen its vote share jump exponentially to more than eight per cent in the 2018 assembly polls from a meagre 0.37 per cent in 2013.

Still, the plight of Brus does not seem to be over yet. Many Brus who have been repatriated to Mizoram, claim of second-class treatment against them. Some of them have resorted to taking Mizo-sounding names and converting to Christianity, but are continued to be seen as ‘outsiders’ by the dominant community.

In a first, the recent winner of state assembly elections, MNF, took oath of government formation with Christian rituals amid reading of Biblical verses and singing of Handel’s fame  ‘Hallelujah Chorus’ and other religious hymns on 15 December.