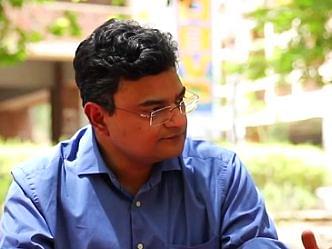 Anand Ranganathan In conversation with Vivek Agnihotri about urban Naxals.

A stone once picked bears no name

Dr Anand Ranganathan on the ongoing protests against the CAA

In a spirited Times Now debate on Monday (30 December), noted author, Swarajya contributor, and scientist, Dr Anand Ranganathan called out on the hypocrisy of the Congress party and the communists who had demanded the exact Citizenship Amendment Bill (CAA) back in 2012 and 2015.

He said, “The left parties had asked for citizenship of Bangladeshis minorities i.e specifically non-Muslims to be given the Indian citizenship.”

However, the same parties who had demanded citizenships for non-Muslim minorities just a few years back are now openly supporting and inciting the “Islamic undercurrent of this protest which is dangerous.”

The Congress thrust the religious on to the roads and now they are openly asserting their identity through supremacist chants, and abusing the nervous Congress.

A stone once picked bears no name.

Dr Ranganathan then turned his attention on the communist and quoted Karl Marx who famously said “Religion is the opium of the masses” and accused the communists party of “pushing millions of the religious and devout out on the streets who have not even read the CAA.”

He further said, “Now the latter (Muslims) asserting their identity through bigoted and supremacist chants like tera mera rishta kya la ilaha illallah and Hinduon se Azaadi (Freedom from Hindus) and the former are getting nervous.”