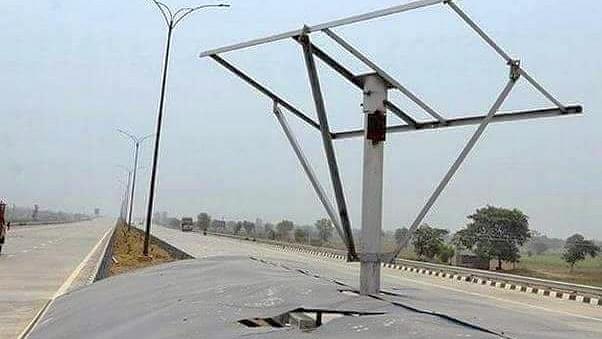 Missing solar panels along the EPE. (pic via Twitter)

Merely days after its inauguration by Prime Minister Narendra Modi, the Eastern Peripheral Highway (EPE) stands vandalised. The 135 km route connecting Uttar Pradesh and Haryana bypassing New Delhi was opened to the public on 27 May after its launch.

The EPE was launched with state of the art installations like solar powered lights, fountains, along with 32 replicas of famous Indian monuments along the route.

However, according to a report by News18, solar panels, electricity poles and even wires along the expressway are missing with all the thefts having happened within the last 15 days.

FIRs have been lodged at the respective police stations regarding the thefts.

The thieves have stolen several solar panels and batteries from along the route. Even high mast lighting poles and electricity wires have been stolen. Fountains along the way have also been vandalised. Iron fences on several tracts of the route are also missing.

The replica of India Gate too has been damaged by the miscreants.