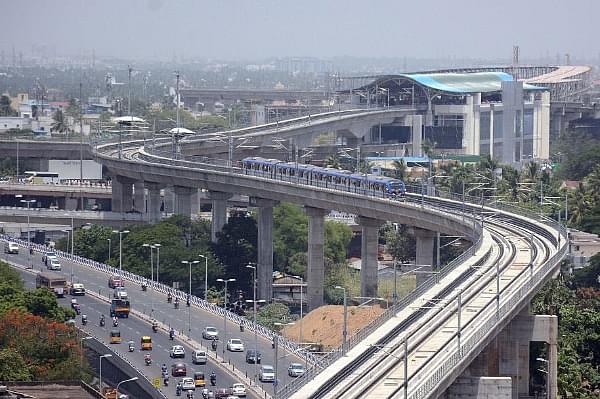 Four underground stations of Chennai Metro will now be run on solar power, starting from lights to air-conditioners to trains. A 103kWp rooftop solar system has been commissioned by Chennai Metro Rail Limited (CMRL) for the purpose. The panels have already begun generating power at Thirumangalam, Anna Nagar Tower, Anna Nagar East and Shenoy Nagar stations.

Every month, 13,800 units of power will be tapped and CMRL has estimated the savings to touch Rs 6.3 lakh a year. By the end of 2018, all the elevated metro stations will turn to solar power as well and an additional 6MW rooftop solar power plant will be successfully installed, reported Economic Times.

The total installed solar capacity is coming up to 1.6 MW to meet demand for daily operations. The first 1MW capacity solar panel was installed in 2016 at the administrative building in Koyambedu, out of which around 5,000 units a day is generated. Earlier this year in September, 250kWp panels were added in the depot.

An additional 125KW capacity was installed in the car park area at the headquarters at Koyambedu. This way, CMRL saves nearly Rs 22 lakh a year by producing more than 1.35 lakh units of solar power monthly.

A contract has been signed with a Mumbai-based company to install solar panels with a capacity of 6MW. CMRL has identified about 25 locations for this purpose. CMRL is hopeful that nearly 90 per cent of the power requirement can be met through solar power, and the rest can be drawn from the general electric grid.