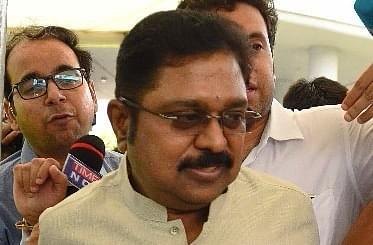 At a meeting in Melur, Tamil Nadu’s Madurai district, Dinakaran also unveiled his party flag of black, white and red with an image of Jayalalithaa at the centre. He said “cooker” will be his party’s symbol until he fights and gets back the two leaves from the AIADMK headed by Tamil Nadu Chief Minister E Palaniswami (EPS).

AMMK will contest all elections, including the one due for local bodies soon, from here on, Dinakaran said at an impressive gathering. The sidelined leader, who was expelled after EPS joined hands with former chief minister O Panneerselvam (OPS) had won the byelections to the R K Nagar constituency, represented by the late Jayalalithaa, in December 2017 as an independent.

At least 20 legislators support Dinakaran and the ruling AIADMK has disqualified 18 of them. The disqualified legislators have petitioned the Madras High court against this. The High Court reserved its judgement recently on this case. Earlier, it had stayed the EPS Government from taking a test on its floor strength. In a related development, leader of the opposition and Dravida Munnetra Kazhagam (DMK) Working President M K Stalin has filed a petition in the High Court seeking disqualification of OPS and nine other legislators for voting against EPS government in February last year. Hearing on this case is yet to be concluded.

In the R K Nagar elections, Dinakaran trumped the AIADMK candidate Madhusudanan by over 40,000 votes while forcing the DMK candidate to lose his deposit. Since then, Dinakaran has made his intentions clear of winning back the AIADMK cadre to his side. The launch of his party is in this context.

Analysts watching developments in Tamil Nadu closely are of the view that it could be Dinakaran versus Tamil film actor Rajnikanth in the days to come with other parties, including the DMK, likely to be sidelined.