‘US, Allies Dropped 46 Bombs Per Day On Average On Other Countries Since 2001’: Report 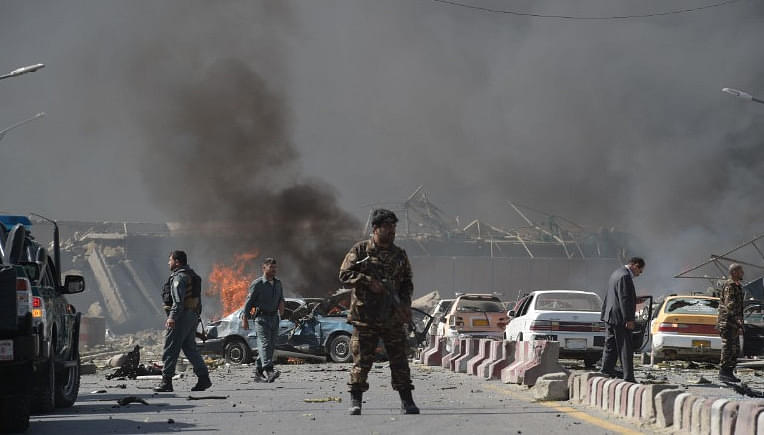 Site of the bombing in Kabul’s diplomatic enclave. (Representative Image)

An average of 46 bombs have been dropped on other countries per day by the United States and its allies since 2001, recent research by anti-war group CODEPINK revealed.

According to the research by Medea Benjamin and Nicolas J.S. Davies of the US-based group, which was published Thursday on the Common Dream website, the United States and its allies have dropped at least 326,000 bombs and missiles on other countries since 2001, including over 152,000 in Iraq and Syria, Xinhua news agency reported on Saturday.

The conclusion was made primarily on official US military releases, as well as data from the Bureau of Investigative Journalism, the Yemen Data Project, and the New America Foundation, the research said, adding since the Trump administration ceased publishing figures of its bombing campaigns in 2020, the total number was underestimated.

Moreover, the data also had not included bombs or missiles used in helicopter strikes, AC-130 gunship attacks, strafing runs from US bombers, or any counter-insurgency or counter-terrorism operations in other parts of the world, the research said.

"The United States has been at war for nearly every year of its existence as an independent nation, fighting in 227 years of its 244-year history," it read.

"The American public and the world are left almost completely in the dark about the death and destruction our country's leaders keep wreaking in our name," it added.

The research was published after US air forces drop seven 500-pound bombs in eastern Syria on February 25, reportedly killing 22 people.

"President (Joe) Biden has foolishly tried to use airstrikes in Syria as 'leverage' with Iran, instead of simply rejoining the Iran nuclear agreement as he promised during the election campaign," the writers said, noting "the US airstrike has predictably failed to halt rocket attacks on deeply unpopular US bases in Iraq."

"Biden cannot restore the world's respect for American leadership, or the American public's support for our foreign policy, by piling more lies, secrets and atrocities on top of those he has inherited," the research concluded.

CODEPINK, established in November 2002 by about 100 women, is a grassroots organization working to end US wars and militarism in the world.