US Sends B-52 Bombers, Spectre Gunships To Stop Taliban From Seizing Afghan Cities 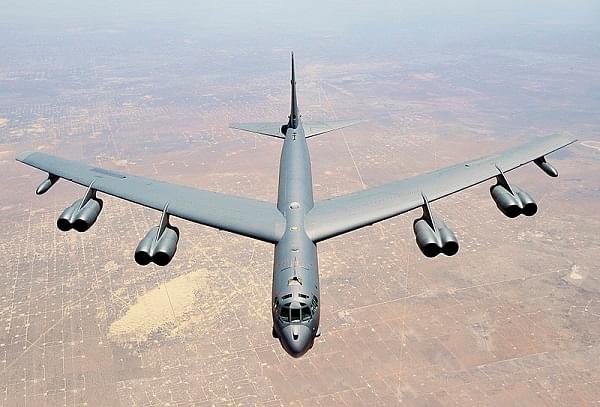 US President Joe Biden has ordered B-52 bombers and Spectre gunships to target Taliban terrorists in Afghanistan who are advancing towards three key cities, Daily Mail reported.

They are being supported by the AC-130 Spectre gunships which are armed with a 25mm Gatling gun, a 40mm Bofors cannon and a 105mm M102 cannon -- which can provide pinpoint accurate fire from the air.

Reports said the B-52s and AC-130s are targeting insurgents around Kandahar, Herat and Lashkar Gar in Helmand Province.

The B-52s are operating out of Qatar, while the aircraft carrier USS Ronald Reagan is on deployment in the Arabian Sea. The nuclear-powered warship has a fleet of F/A-18 Super Hornets.

The Afghan Air Force is equipped with some turbo-prop light attack aircraft such as the A-29 Super Tucano, though only 30 pilots have been qualified since 2015.

The US Air Force continues to aid the Afghan air force's bombing of Taliban targets in southern Helmand and Kandahar provinces, as Afghan security forces try to prevent a Taliban takeover, the report said.

The Taliban have been advancing across Afghanistan after the US-led coalition pulled out of the war-torn nation, leaving the country's struggling defence forces to deal with the terrorists.

Earlier on Saturday, the Taliban captured Sheberghan city in Jawzjan. It was the second provincial capital to fall to the insurgents over the past 24 hours after Zaranj fell on Friday.

A video has emerged on social media which appears to show prisoners fleeing Shiberghan after the Taliban managed to gain control of the prison.

Similarly, another clip on Twitter appears to show something similar that had happened in Zaranj, more than 700 miles away.