US Will Go To War In The South China Sea In Five To 10 Years: Trump’s Chief Strategist Steve Bannon 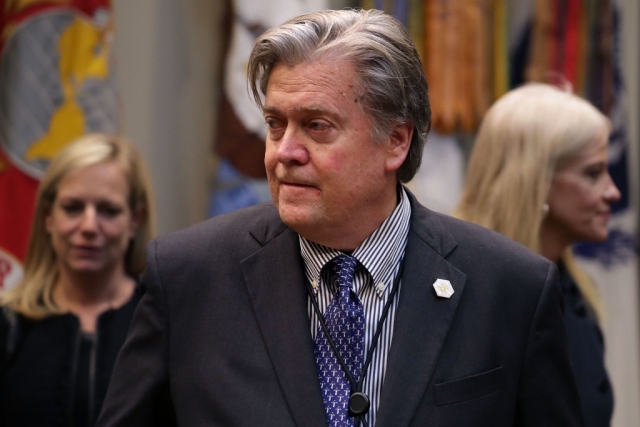 President Donald Trump’s Chief Strategist at the White House, Steve Bannon, had said in March 2016 that the United States and China will fight a major war in the South China Sea (SCS), The Guardian reported today. He also said the that another major war in the Middle-East, involving the US, is inevitable in the next 10 years, the daily claimed. Bannon is regarded as one of the most powerful men in Trump’s administration and is know to have great influence on the president.

“We’re going to war in the South China Sea in five to 10 years,” the daily quoted Bannon as saying. “There’s no doubt about that. They’re taking their sandbars and making basically stationary aircraft carriers and putting missiles on those. They come here to the United States in front of our face – and you understand how important face is – and say it’s an ancient territorial sea,” he said at least nine months ago.

China claims almost 90 per cent of SCS and its island building and militarisation spree has created tensions between the two powers. Beijing has also rejected the verdict give by the Permanent Court of Arbitration at The Hague, disqualifying China’s ‘historical’ claims to the region and its resources based on the nine-dash line. The SCS is home to major shipping lanes and US-led world fears China’s dominance on these trade routes. New Delhi too stands by Washington on the issue.

Bannon’s statements add to the warning issued by Secretary of State Rex Tillerson, who said that the US will deny China access to the seven island chains that it claims in the region. Bannon has, at various occasions, cited China’s growing power and Islamic extremism as the two major threats to the US.